The last week of July we took a trip to the San Francisco Bay Area.  Zac was speaking at a conference, and it was perfect timing for me at work, so we made a vacation out of it.  His conference was in Redwood City, in the Silicon Valley area south of San Francisco.  So we camped out south of SF for the first few days, an area we had both never been to before.  This post is part 1 of 2 about our trip, focused on the good eats and treats we had south of the Golden Gate City.

For this trip we kept the planning to a minimum, took the "lets just play it by ear and see how we feel" approach.  We often make reservations for hard to get into places months in advance, but not this time.  The do what we feel like approach worked out great, lots of good fun and fun!

We landed mid afternoon Pacific Time, and headed over to Half Moon Bay, a small town on the Pacific Ocean, just across the hills that separate Silicon Valley and the Pacific Ocean.  I was so excited to see the ocean.  Something about water is very relaxing, right?  We explored the area a bit, saw the ocean (yay!), and by 5pm local time were starving since our stomachs thought it was 7pm (by our I mean me, I was starving).  We ate dinner at Pasta Moon, a local favorite specializing in homemade pasta and fresh local seafood.   Even at the early hour we ate we had to eat at the Chef's table/bar it was so crowded/booked up for the night.   It did not disappoint.

Full as clams, we ventured back to the hotel, about a 30 minute drive. It was still very much daylight, and on our way back over the mountains/hills between the Ocean and Valley, we caught the Marine Layer making it's daily journey from the sea inland.  This was absolutely stunning to see, the picture below doesn't do it justice.  It was very foggy down by the ocean, then as we drove up up up it was like driving into the clouds, and then just like that we emerged into the sunlight, but could see the clouds, or "marine layer" rushing up over the crest of the mountains.  It was awesome.  At this point I did not yet know the term "marine layer", but after we got back to the hotel, because I'm a total geek and wanted to learn more about what I just witnessed, I googled "San Francisco fog" and quickly got up to speed.  We all know the area is famous for the fog, but if you are really interested in this phenomenon, (I'll talk more about it again I'm sure), here's the Wikipedia link. 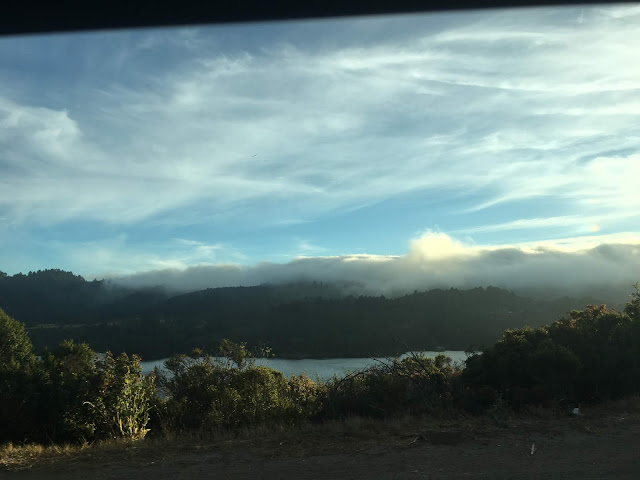 Thursday was our first full day.  We were up early, still adjusting to Pacific Time, plus Zac had a couple work related things to take care of (Pacific time is the worst when your client/work world is on Central and Eastern time by the way).  So I ventured out on my own for a bit.  My main goal was to visit this very cool redwood tree we saw on the way to Half Moon Bay the afternoon before, that didn't seem too far away, and it wasn't.   It's in the parking lot of a local girls private high school.  After a few takes using the timer function on my phone (balanced on the hood of our rental), I was able to get this shot of me and "the tree".  I'll admit the first couple didn't work out, and by this take I was a bit winded from running back and forth =).


Donuts sounded good after all that running around, so stopped at a local donut joint in Belmont, CA.  Chuck's Donuts will be getting an excellent Yelp review from me let me tell you. 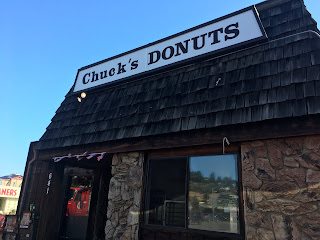 Now to really start our day.  Our wish list was long, not sure we'd get to all of it, but this is what we wanted to do:  walk around Stanford University, visit Google HQ, take-in the hip areas of Palo Alto, see Facebook, and check out Mountain View.  Sorry Apple, while I depend on you ALOT, your HQ is rumored to be not very inviting, so we left Apple off the list.  Plus it was quite the trek down to Cupertino from everywhere else on our list.

First stop was Stanford, and on the way we picked up In-N-Out to have a picnic lunch on campus. 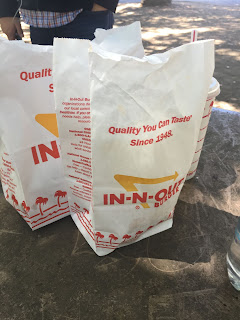 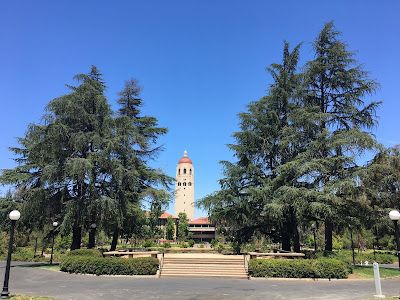 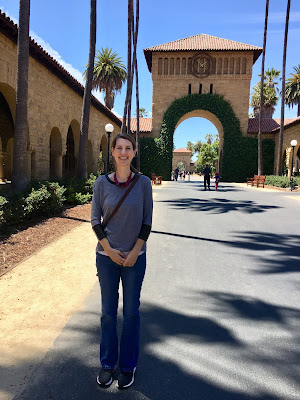 My great-grandfather went to Stanford over a hundred years ago, studied Physics.  He came over from Japan for grad school in the US.   After finishing his studies, going back to Japan and getting married, he came to the US permanently.  It was very surreal for me to be on the campus, looking at the Chemistry building built in 1900 and thinking, wow he was here when that was brand new, and probably took classes there.  Of all the things we did on our trip, going to Stanford and walking in his footsteps was one of my favorite things we did.

Next stop was Google, which does not exactly encourage visitors but does not discourage them either (I'm sure we parked in an employee only parking space).  There were tours going on, but the interesting things were to see all the "fun" stuff the employees could do outside.  There was a lap pool, that kind that has a pump to simulate moving water but you are still.  Beach volleyball.  Lots of lounge chairs.  Outdoor dining and coffee bar areas.  A replica Tyrannosaur for some reason.   Lots of plants.


Zac's presentation was that evening during dinner time, so we had a late afternoon meal, then planned to venture out again after he's done for some dessert or 2nd dinner, whatever strikes us. We head over to Mountain View, which has lots of restaurants, shops, bars, etc to walk around and take it all in.  We didn't stop at this ice cream/bakery, but i enjoyed this sign in the window. 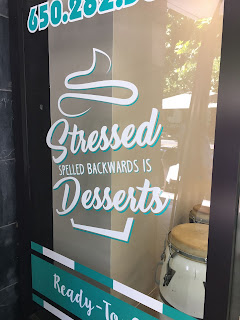 We landed on eating at Crepevine, a family owned restaurant with a dozen or so locations around the entire Bay area.  Have I ever mentioned I LOVE crepes?  I do indeed.  An entire restaurant devoted to crepes?  Yes please. I opted for sweet crepes (surprise surprise), Zac got savory.


Zac is awesome at his job.  Really, I'm not just saying that because I'm his wife.  The plan was he would give his presentation, should last about an hour he thought including Q&A, then he'd come back up to the room and we'd go adventuring again.  Well, 2.5 hours later, he texts he can't get away from all his fans and people wanting to talk to him, I'm tired, so I decide i'll hit the sack.  Not 30 seconds after I turn out the lights, he arrives.  I bolt up, he's like, so what's the plan, where are we going, and why are you in bed???  The evening is just beginning.  So, out we go.

We didn't have time earlier to go to the happening area of Palo Alto, or to Facebook HQ.   It was getting a bit late, but Palo Alto is a college town after all so surely things would be open (the area we went is right next to Stanford).  We went to Cream, dessert place that specializes in ice cream sandwiches of the gourmet variety - you can use brownies, "cronuts" or cookies for your "base", then choose from a large variety of ice cream flavors to put in the middle.  And milk shakes and other ice cream related confections are offered too.   Zac got a milkshake, and I got a chocolate salted caramel themed sandwich.  They hit the spot! 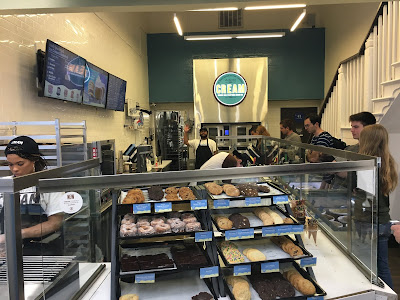 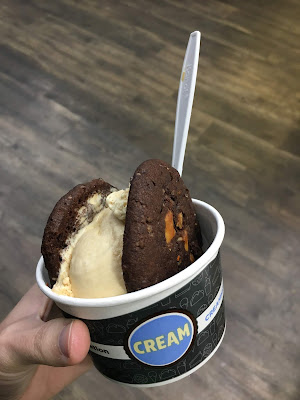 Last but not least, Facebook.  It's after 10pm local time when we get there, but it's lit up enough so we get a feel for the place. The main compound was very large, and could see construction around with expansions in the future it seems. The road that circles Facebook is called "Hacker Way".....interesting.  This is a picture of the only sign on the premises, greats you at the main entrance. 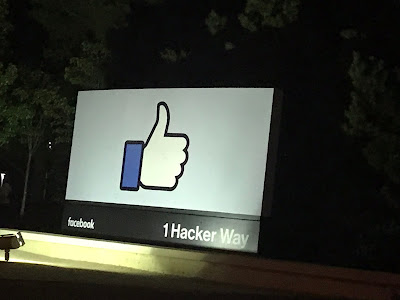 Friday morning I had some more time on my own to explore while Zac wrapped up his work business.  I wanted to drive up Highway 1 for a while -  it literally is right along the Pacific Coast = MORE OCEAN VIEWS.  I went back over to Half Moon Bay (there are very few places to cross the hills/mountains), and picked up Hwy 1 there, and headed north.

I stopped at a few spots, all beautiful, but Montara State Beach was breathtaking. 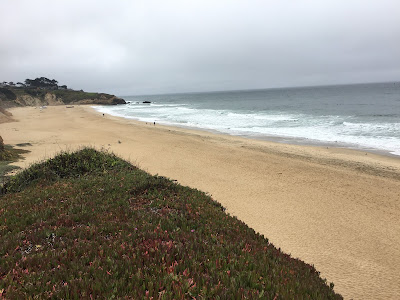 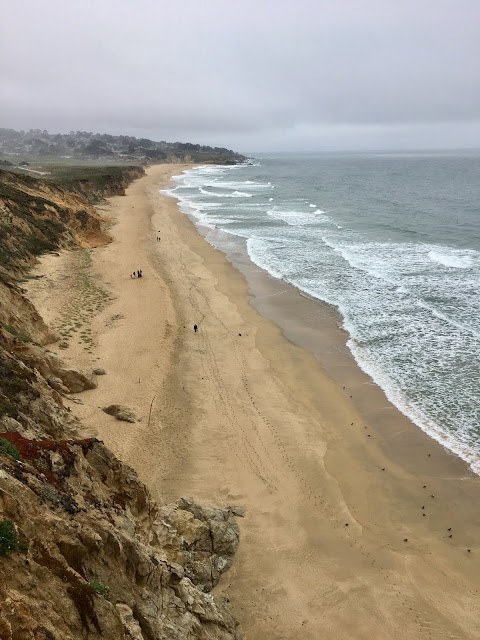 Watch for some relaxing wave sounds! 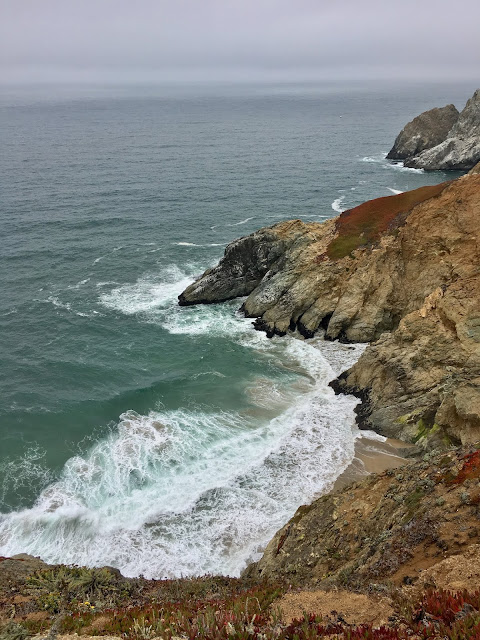 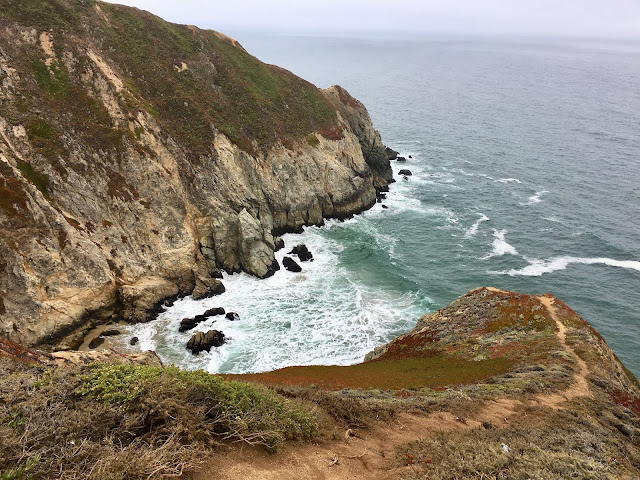 I did not want to leave the coast!  It was almost hypnotizing to listen to the waves crashing against the rocks.  Beautiful place!! But, my other half awaits, and I planned to bring lunch back with me.  One food "celebrity" that I follow is J. Kenji López-Alt, who recently won a James Beard Award for best cookbook The Food Lab.  He writes for Serious Eats website.  He's very much into learning about where science meets food.  Good stuff.  He opened his first restaurant recently in San Mateo, CA, and guess what, I was about to drive right through there!  The restaurant is Wursthall, a German food and beer hall.   I got everything to-go and got to the hotel just in time for checkout. 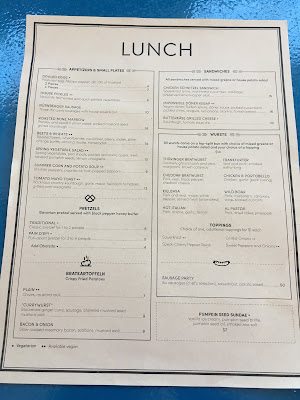 We ate our very tasty German food leisurely by the pool at the hotel, then said goodbye to Silicon Valley.  Off to the Golden Gate City!

Tune in for my next post on more eats and adventures in San Francisco!