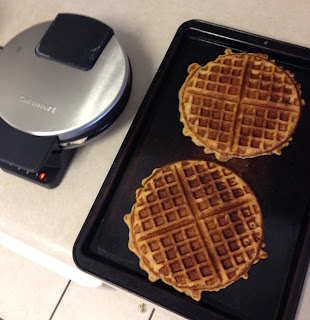 So it's been a while since I've written anything about the food I've cooked.  I mean a WHILE.  I'm one of those people who takes plenty of pictures and has all the best intentions, but you know life happens and I ignore this blog for months on end.  I post my food photo on Instagram, Facebook, and Twitter and move on.  Today though I totally want to share what is now one of my favorite waffle recipes ever!   This may be my absolute favorite actually.  I found it by googling recipes for leftover mashed sweet potatoes.  I first found Alton Brown's recipe, which i'm sure is delicious.  I use his classic waffle recipe, and all in all find all things Alton Brown to be delicious.  He is a genius.  But here, I stumbled upon a recipe from the company Nature Box (that snack box company) of all places, and adapted my recipe from there.   I rarely "adapt", which for me usually means I don't have exactly that the recipe calls for so i'm making due, but on a rare occasion i'm making it healthier or truly adapting to my tastes.   I suppose all of the above is true in this case.  Here we go, leftover mashed sweet potato waffles!

I literally used leftover mashed sweet potatoes.  My mom made them for Thanksgiving, so I can't tell you exactly the amount of butter and milk in them.  Point is, you don't need to know, as long as you have some faint idea.  It is important to know if there is any salt so you don't add even more when making the waffles.


I use the "Muffin Method" for making quick breads, waffles, pancakes, and muffins courtesy of Alton Brown, because again, he's a genius.  Mix your wet and dry ingredients in different bowls, then combine.


Make a well at the center of the dry ingredients and pour on the wet mixture.  Fold them together for no more than 10 strokes! DO NOT OVERMIX.  That ruins it (for years i wondered why my pancakes didn't rise well and it was because I was an overmixer).  It will be lumpy but that is ok. 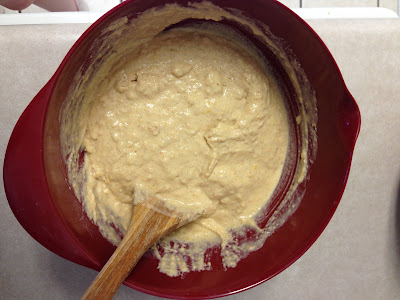 If you felt inclined to add pecans or some other add in, fold it in now. (Wow toasted pecans sounds like a great addition for next time!)

Let the batter sit few minutes. Now is a good time to go find your waffle maker and let it preheat.  By the time it's ready your batter will be ready.

I lightly sprayed mine with cooking spray the first time, but found I didn't need to as all the other batches released just fine. 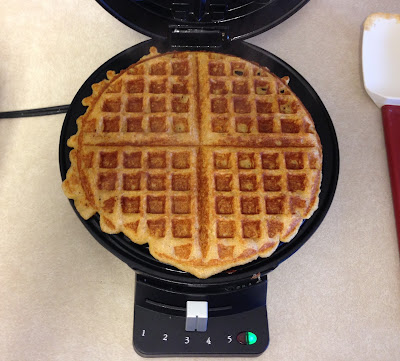 Now make waffles! I cooked my first one on 3.5 setting, but for waffles 2-6 bumped it up to 5.  Drizzle with real maple syrup (please none of the fake stuff!) or honey.  No butter needed. 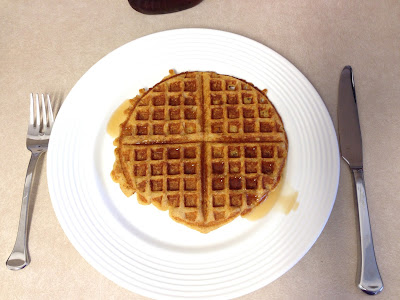 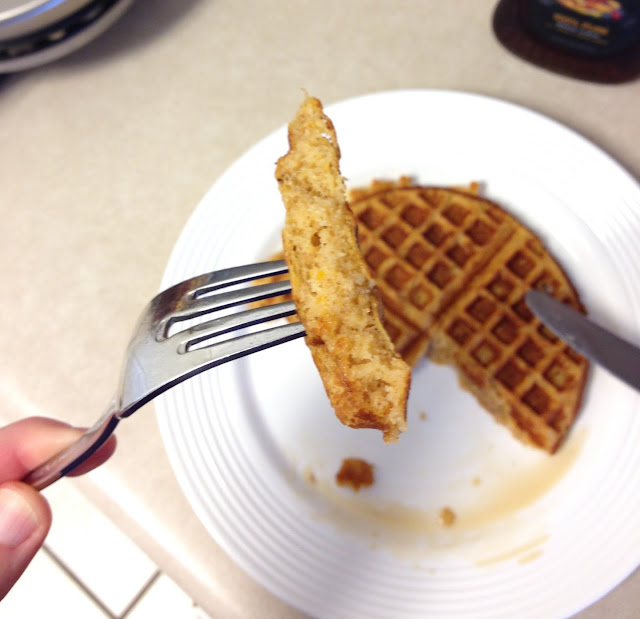 At this point since I'm the only waffle eater in my house, I put them on a pan to cool completely, the bag and freeze for later.  Homemade frozen waffles toast up great later!

Makes: 6 waffles.  I'll let you decide how many servings that is.

Ingredients:
Directions:
1. In a large bowl, combine flour, cornstarch, sugar, cinnamon, baking powder, baking soda and salt.
2. In a large glass measuring cup or another bowl, whisk together sweet potato puree, milk, Greek yogurt, melted coconut oil, eggs and vanilla. If the melted coconut oil is hot, drizzle it in slowly while constantly whisking.
3. Pour mixture over dry ingredients and stir using a rubber spatula just until moist, about 10 strokes. Do not overmix!!  It will be lumpy. Fold in pecans, if using.
4. Preheat your waffle iron and let the batter rest while waffle iron heats.
5. Lightly coat the waffle iron with nonstick spray (if needed). Scoop just enough batter to cover the waffle grid and cook until the waffle is golden brown on both sides.  I recommend using the highest setting on your waffle iron.  Serve with maple syrup.
Tips: If you’re making a big batch to serve, hold the waffles in a 200 degree F oven to keep them warm.   If you won't be eating them all immediatly, let cool and freeze.  When ready to eat, go straight from freezer to toaster oven.  Toast and eat.
Adpated from NatureBox Blog - Sweet Potato Waffles

Last weekend we took a long weekend getaway to two cities we'd never been to before - Charleston, SC and Savannah, GA.  Zac had an opportunity to go to Charleston for a speaking engagement.  I took some time off work and we made a mini-vacation out of it.  We live in the South, but for whatever reason had never made it over to either city.  Charleston has been on our short list of places to visit due mostly to  the city going through a food renaissance of sorts over the past several years. What we've heard about James Beard Award Winner Chef Sean Brock and his restaurant Husk pretty much sealed the deal in our wanting to go sooner rather than later.   So off we went! 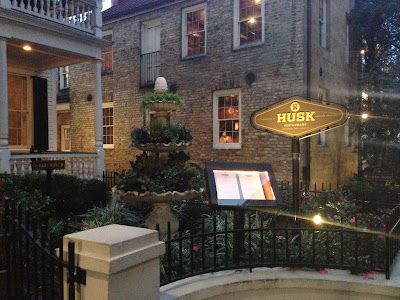 We went down on a Thursday and came back on Sunday; Charleston is roughly a 7 hour drive from our house.  We were not able to get reservations to Husk, but found out that at 5:15pm you can get on a waiting list for the porch, which is literally a small porch on the front of the Charleston mansion turned restaurant.  We arrived about 5:25pm and were told we'd only have to wait 20 mins!  So far so good.   Oh, and they send you a text when your table is ready, super convenient! 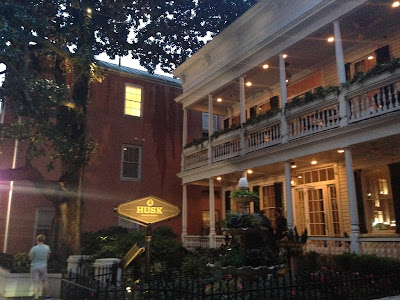 Upon checking in with the hostess, we were told they had a cancellation, and asked if we preferred to sit inside or outside.  We opted for inside, even though eating outside on a cool November evening would have been fine too. 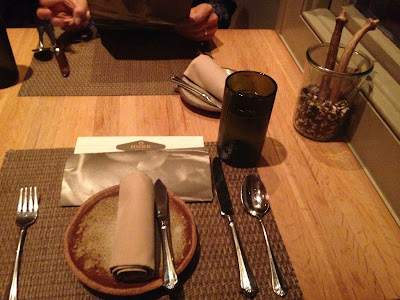 As is our tradition for our fancy meal splurges, we created our own chef's tasting menu (they did not have that option available) and ordered lots of first courses to share, and then an entree each (which we also share!).  Here is our menu for the evening: 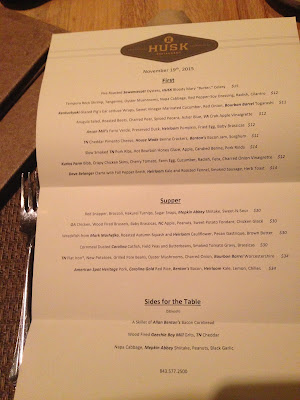 I won't spend much time on the background of the restaurant, cuisine, or Sean Brock, so I encourage you to check out Husk's website and read about it for yourself.  Also encourage you to watch PBS's Mind of a Chef season 2, on which Sean Brock is one of the two main subjects.   Basically Husk focuses on food regional to Charleston and using heirloom varieties of both produce and protein.   It's not your typical Farm to Table restaurant or your typical low-country restaurant, but the best of all of that.  They have contributed significantly to research and cultivation of many heirloom foods  native to the area that have long been lost to industrialized farming.  Same goes with pork, they are well known for what they are able to create with pork and the variety of pig as well.  So, that being said, we have to order lots of pork! 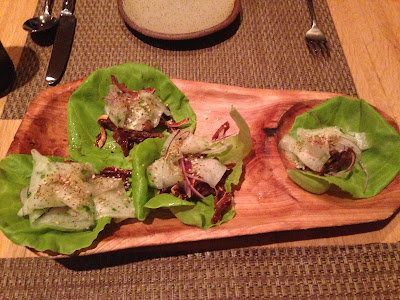 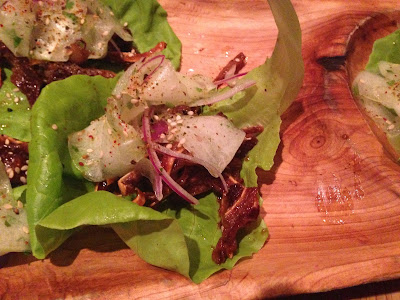 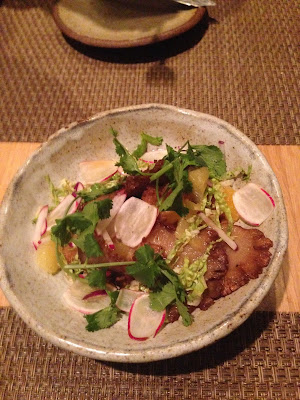 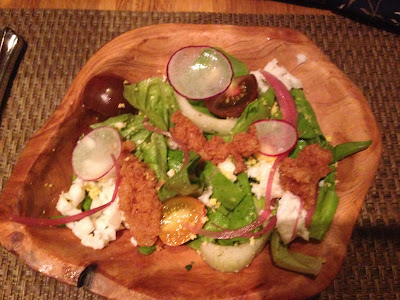 Fourth Course - Anson Mill's Farro Verde with preserved duck, heirloom pumpkin, fried egg, and baby brassicas.  This was my first time having farro, and I'm now a HUGE fan.  I recently bought some after Cooking Light highlighted it with other lesser known grains, but hadn't made it yet.   Can't wait! Although I don't think I can get it anywhere near this tasty.  They just rolled this out on the menu the day before, lucky us! 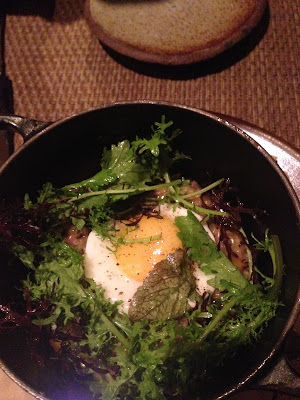 Fifth courses - the entrees.  I got the Wreckfish from Mark Marhefka with roasted autumn squash and heirloom cauliflower, pecan gastrique, and brown butter.  Wreckfish was very mild and well cooked (never had it before or heard of it before), cauliflower and vegetables were perfectly charred.  The squash was so tender and sweet I almost convinced myself they had given me some sort of fruit by mistake! The pecan gastrique made it even more tasty. 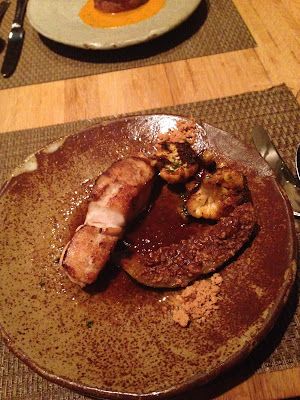 Our other entree was the creme dela creme - American Spot Heritage Pork with Carolina Gold red rice, Benton's bacon, Heirloom kale, lemon, and chilies.   The entire dish lived up to all the hype and then some!  The pork was very terrine like, meaning it was several cuts mashed together in the patty shape. 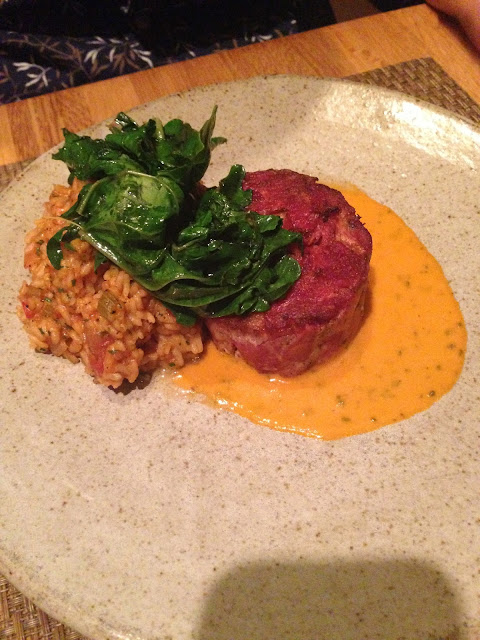 We also got all of the sides, which were a skillet of Allan Benton's Bacon Cornbread, Wood fired Geechie Boy Mill Grits with TN Cheddar, and the last dish of Napa cabbage, Mepkin Abbey Shitake with peanuts and black garlic.

So what did we think?  There is a good reason that Husk is one of the hottest restaurants in the country right now.  It's not just an award winning chef making good food, it's the food itself.  Using the heirloom varieties with so much more flavor than what we are used too is super cool.  If we had to choose just one thing to order again, it would be the pork entree.  Amazingly delicious! Overall a wonderful meal and very glad we had the opportunity to eat at Husk.

Next up I'll write out all our other tasty adventures in Charleston and Savannah. Stay tuned!