Day 5 - Our last full day!! Ahh!! What an AMAZING trip we have had so far, it's hard to know how it can be any better.  Well except going to see The Late Show with David Letterman during his last few weeks on the air!!  Eating dinner at Le Bernardin!! Even one of those things would be the perfect way to end our trip.  Both though! How lucky are we!!

We've been told to be at the Ed Sullivan theater ready to check in at 1:00pm.  We wake up and leave the hotel with enough time to take in the area around Central Park, and get a quick bite to eat at the Plaza Hotel Food Hall.   On the way we stop in at Barney's, well just because that's a fun thing to do, take in some nice views of the Plaza, and then emerge from the buildings to this beautiful site: 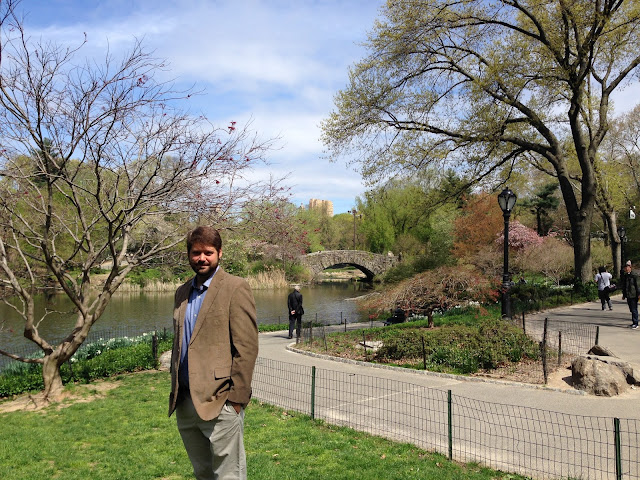 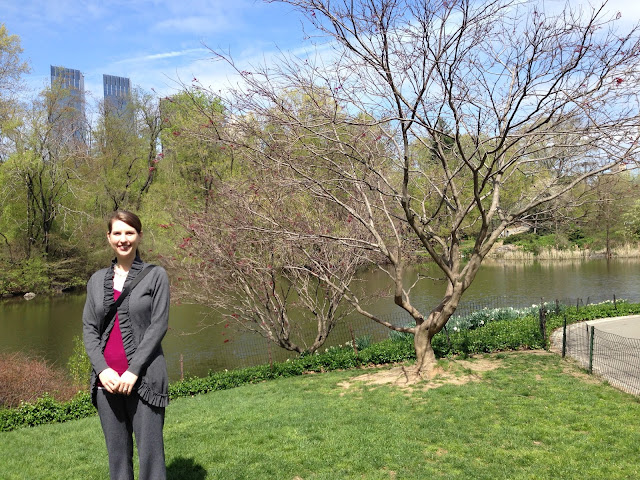 A friend had told me to not miss Lady M cake boutique when in NYC.  Guess who has a booth at the Plaza Food Hall??  Green tea everything is all the rage in NYC, including the mille crepe cake at Lady M.  More on this later. 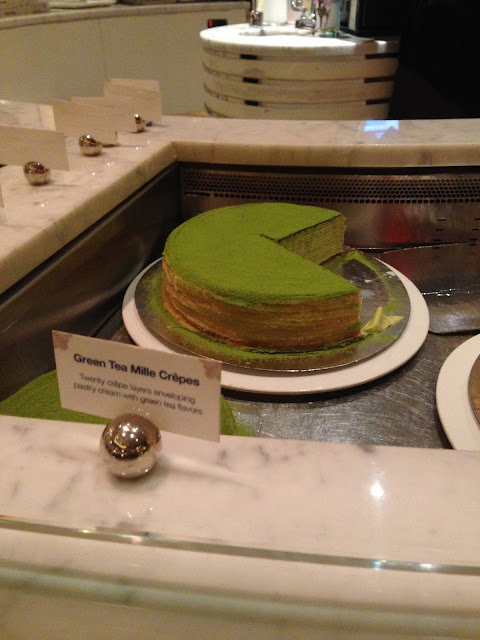 It was hard to choose what to have for lunch, but we landed on Luke's Lobster.   Zac got the sampler which is 1/2 lobster roll, 1/2 shrimp roll, and 1/2 crab roll.  I got the classic lobster roll.  Delicious!!

There are a million dessert options at the Plaza Food Hall.  Really literally thousands if you include all the flavors of truffles and chocolates!! But, we could not pass up a Lady M cake experience, so shared a piece of the green tea mille crepe.  See all those layers??  The creme between each was so creamy and light and the crepes were airy and perfect.   We've never had anything like this ever, and not sure we will again! (So as luck would have it, you can order this cake online and they will send you one in the mail!! It's frozen, but after thawing the texture was not at all compromised.  We ordered the standard flavor for a summer celebration, delicious!!). 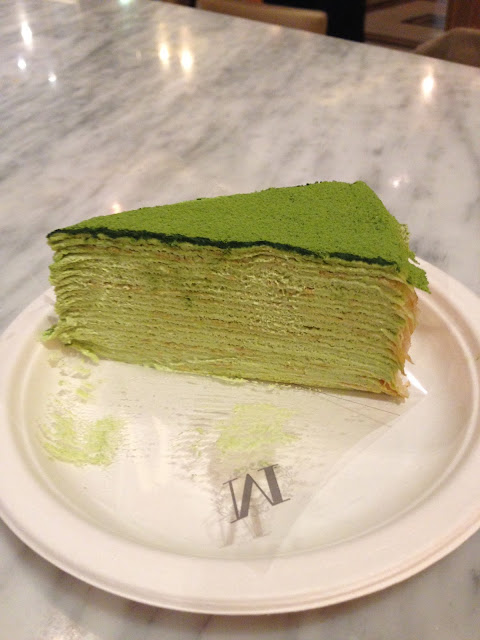 Full of lobster and crepe, we head over to Broadway to scope out the Ed Sullivan theater.  Now is the time that I will mention why we were told to be there at 1:00 pm for a 4:00 taping.  The guest was First Lady Michelle Obama!!  We did not know this until the day before, it was a surprise for everyone.  So we decide to get there closer to noon, park ourselves in a Starbucks across the street so we can monitor the situation.  We start to see some people lining, up, and go ahead and get in line ourselves.  If you are like most people and have never seen the Late Show taping, this is a very secretive process.  First, we have no tickets.  We only received the phone call that we have been selected (via lottery by registering on the website) the Friday before.  We planned the NYC trip knowing we COULD get tickets but not banking on it.  So the Friday before call was unexpected! During the call they said to show up at 1pm, and to say this special phrase when asked, and that was it.   Thanks for Zac's superior online sleuthing skills, he found out you can't show up to stand in line TOO early.  While we know we already have a ticket, we do not understand the line, but know we should get there early.  Zac also learns online that letting your enthusiasm show if and when you are approached by a Letterman Page is a good idea, although no so enthusiastic that you seem like a crazy stalker person.  Just enough.  Tip #3 - don't dress like a crazy person or a homeless person.  You will be on TV after all, and neither are good TV.  So, we leave the Starbucks closer to 12:30 and end up about a dozen or so back in line.  Here's some of the security; 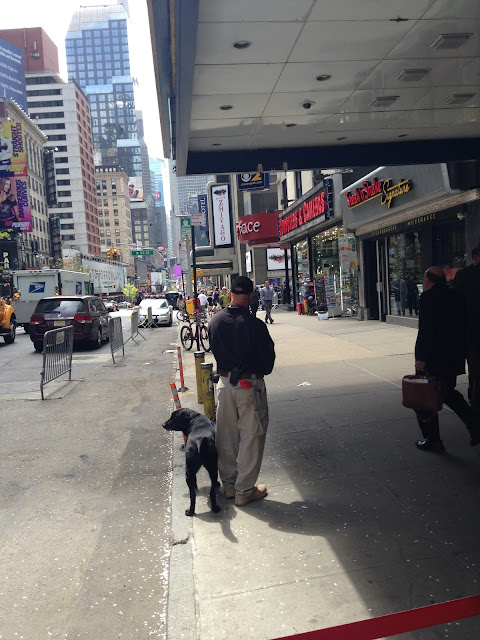 Also, what they don't tell you is there are many lines to stand in.  We go through the first line, show our ID, let our enthusiasm show, and get actual paper tickets.  They are then sending most people to another line, but tell us we have been selected as audience leaders (!!!!) and can leave and be back in about an hour.  Audience leaders!! We have no idea what that means, but it must be good since we get to leave and come back. Not like most others who have to keep standing there corralled like cattle.

We have just enough time to stroll over to Rockefeller center and get Top of the Rock tickets.  We thought we could actually GET to the top of the Rock during this break not realizing that we had to get a reservation for later. But that's fine, we made reservations for early evening after Letterman would be finished and well before our dinner reservations at Le Bernardin. 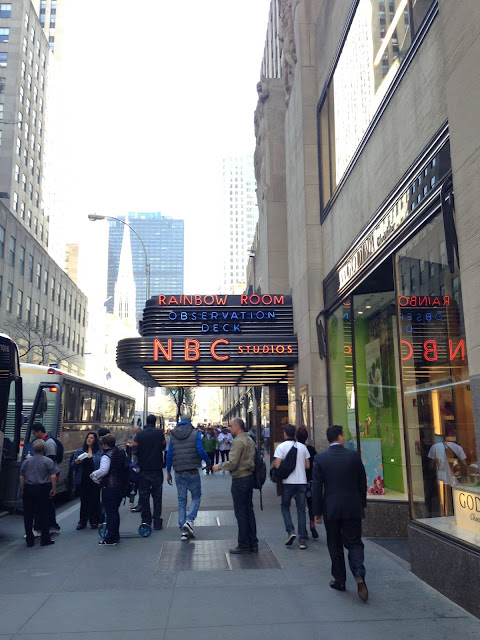 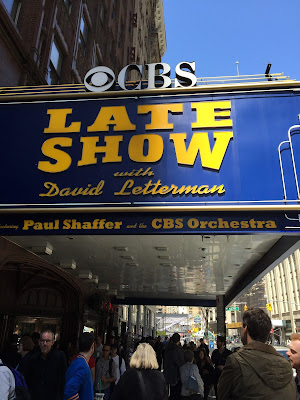 We are super pumped.  We find out we are "special" and will be sitting at the front of the theater.  We are told by the Pages that they liked our energy.  Dave likes positive energy people down front.  Ahh!! That is what I kept saying in my head this whole time, and sometimes out loud :).  But not enough that they would think I'm a crazy person.


What's the deal with the blue dot on the back you say? I'm glad you asked.  It's the "you are super awesome with awesome energy and good looks so you get to sit at the front" sticker.  That sticker set us apart, let us leave and come back, and let us stand in the special line. 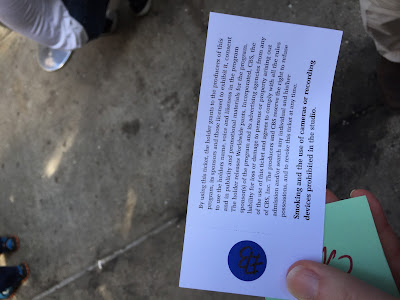 No photos are allowed upon walking through the front doors of the Ed Sullivan theater.  No sneaking iphone photos either, they will seriously take it from you!!  So, the only photos of our experience at the Late Show are pictures of the TV of the show that aired.  Hey, it works!

Back to how awesome they thought we were - So not only did we make the cut for the general front section of seating, but they take you and escort you to the spots they want you to sit.  They grabbed us and plopped us down on the front row!! The FRONT ROW!!  We were on the aisle, on the front, in the section just left of center.  I circled us in the photo below.  Ahhh!!! To the guy that was seated to my right - you were a super fun Letterman show taping-mate.  We will never see you again, but will always remember you when looking at this photo.


The First Lady surprised everyone and brought in The President's Own Marine Band!  Seeing as how we were on the front and on the aisle, we had an up close and personal view of the band marching in.  See us below to the left of the band member.  It was so exciting!! Ahh!! 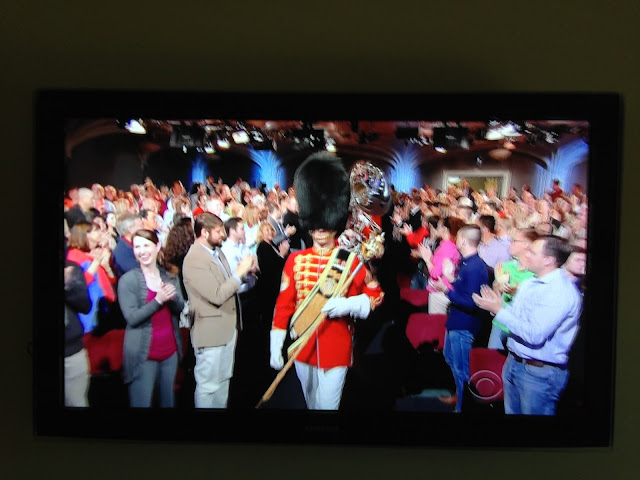 The whole show seemed to pass by in a flash.  I remember giving a thumbs up to one of the band members when we were leaving and he gave me a thumbs up back.  David Letterman looked exactly like he does on TV.  Oh! The orientation video!!  After we were all seated they played a video for us. It was HILARIOUS.  It was an orientation to being a Late Show guest, hosted by Alec Baldwin.  Great way to start the evening.  Dave came out before the show and chatted with the crowd, took some questions, and found ways to interject into the actual taping bits from these questions as little inside jokes with the crowd.   We were and are Letterman fans.  He will be greatly missed and we feel so fortunate to have had the opportunity to see him before he decided to hang it up.  Once in a lifetime experience.

The musical guest! Forgot to mention - it was Hootie and the Blowfish!  They sang Hold My Hand and it was great.  After the show guess who's hand I shook?? Darius Rucker!  Our stellar luck continued with catching him going from the studio to the car and getting to the front to see him! That is my ear on the lower right, my hand locked with his. 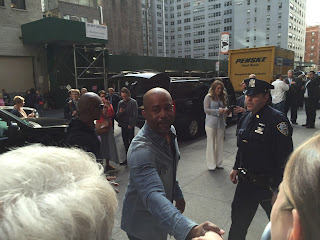 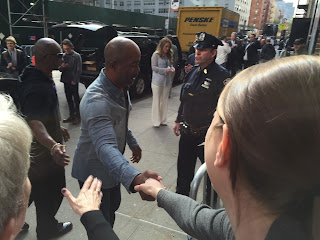 We go from the high of seeing Letterman to the actual high of being on top of Rockefeller Center!  What an amazing view!! 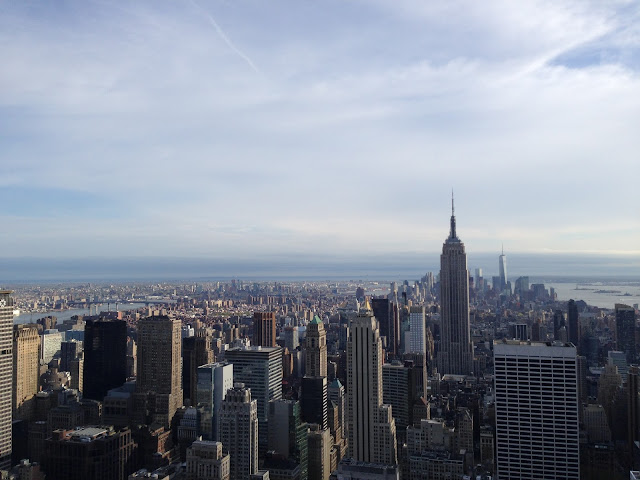 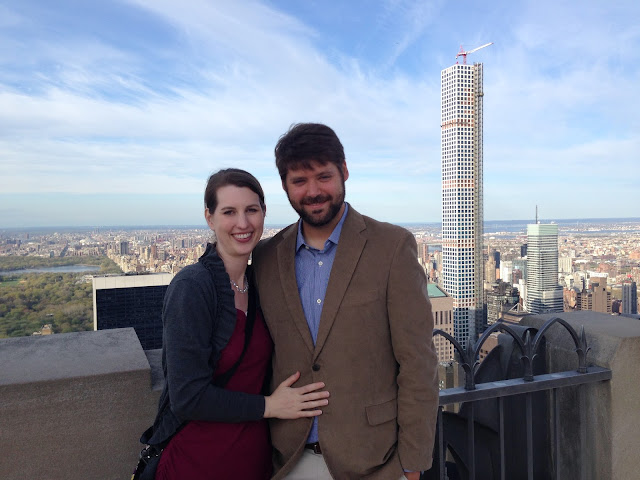 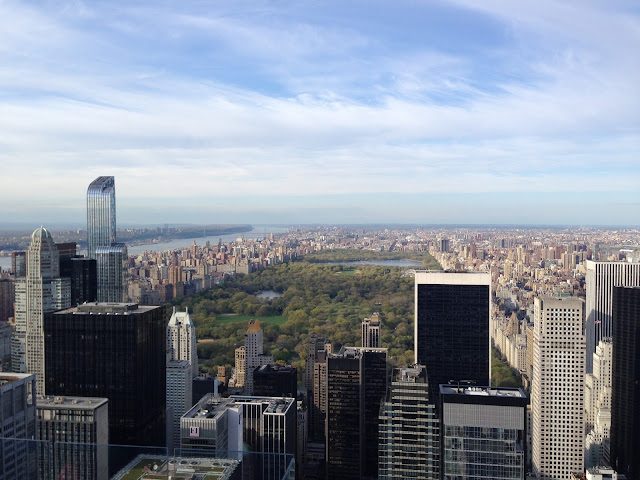 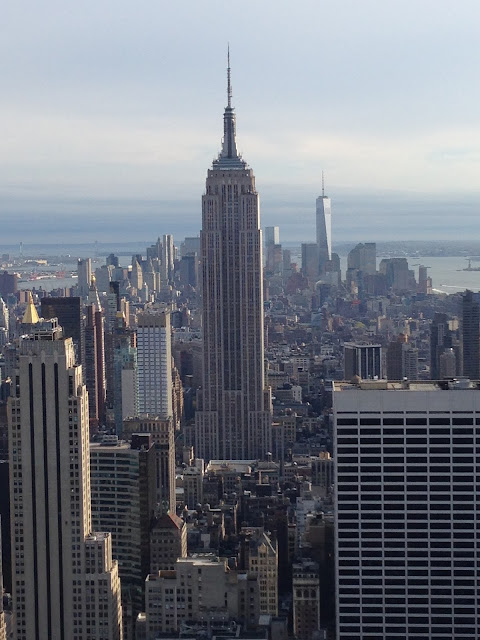 We could have stayed up there for hours, but dinner called.  Our reservations were for 8:15, time to go rest and freshen up!

Dinner at Le Bernardin, a 3 star Michelin restaurant and consistently ranked one of the best restaurants in the world....and we are there! Wow. just wow.  Le Bernardin is known for the highest quality of fresh seafood and they lived up to that reputation 100%. Each bite was melt in your mouth perfection.  The presentations were so elegant too!  We love watching Eric Ripert on his show Avec Eric; dining at Le Bernardin is a perfect way to close out to our NYC getaway.  We were fortunate to dine with friends, so not only good food but good company too!  We all opted for the 4 course prix fixe menu.

First course - Zac had  the first dish below, we will call it The Dish So Good We Can't Remember Exactly What Was In It.  No hard copy menu souvenir to reference and this dish was missing from the menu online the next day.  Whatever it was, it was beautiful, fresh, and delicious! I had the Scallop-Sea Urchin, with of Maine scallops, marinated Granny smith apples, and Meyer lemon vinaigrette.   We also ordered the assortment of oysters as an extra appetizer.


What a feast!  I don't have any pictures, but I may have helped one of our friends finish her dessert. She got the Dark Milk Chocolate dessert and it was delicious!

After 5 days in NYC, we haven't yet seen Times Square, and Le Bernardin is just a few blocks away. We finish up our evening with a stroll to Times Square and then back to the hotel to call it a night.  New York is so pretty at night! 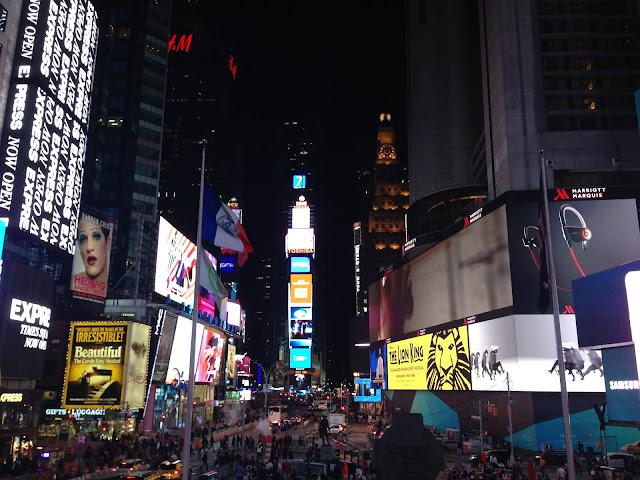 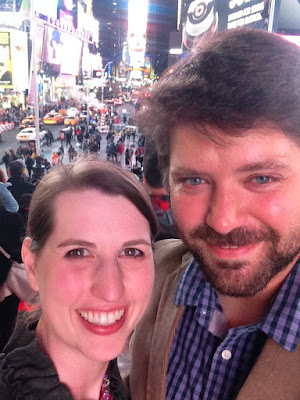 I can't close out our trip without a shout out to the Paris Baguette a block from the hotel.  We stopped by for breakfast on Day 6 - Travel Day home and got a nice assortment of brunch items.  We also got some pick me up snacks there on other occasions on our trip.  It was all great!


Goodbye NYC.  Thank you for helping us having an unforgettable 10-year wedding anniversary celebration!   We will be back!