I should have started the last post on Day 1 with the picture below. Zac saw this at the Chelsea Market (stay tuned for Day 4!), thought the sign below was perfect.  Treat Yo Self.  Pretty much summarizes the theme of our trip! 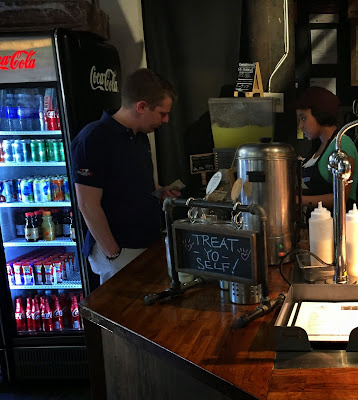 Day 2 was a Monday, so we headed down to the Union Square Greenmarket to start our day.  The Greenmarket is one of many farmer's markets throughout the city.  Have I mentioned how beautiful the weather was our entire trip? Plus everything was in bloom!


We had a light breakfast at the Greenmarket, some juice and fruit. Very tempting to buy more, but we had to save room for what we had planned in the near future....

Could not leave Union Square without taking a quick look at Tamany Hall on the NE corner: 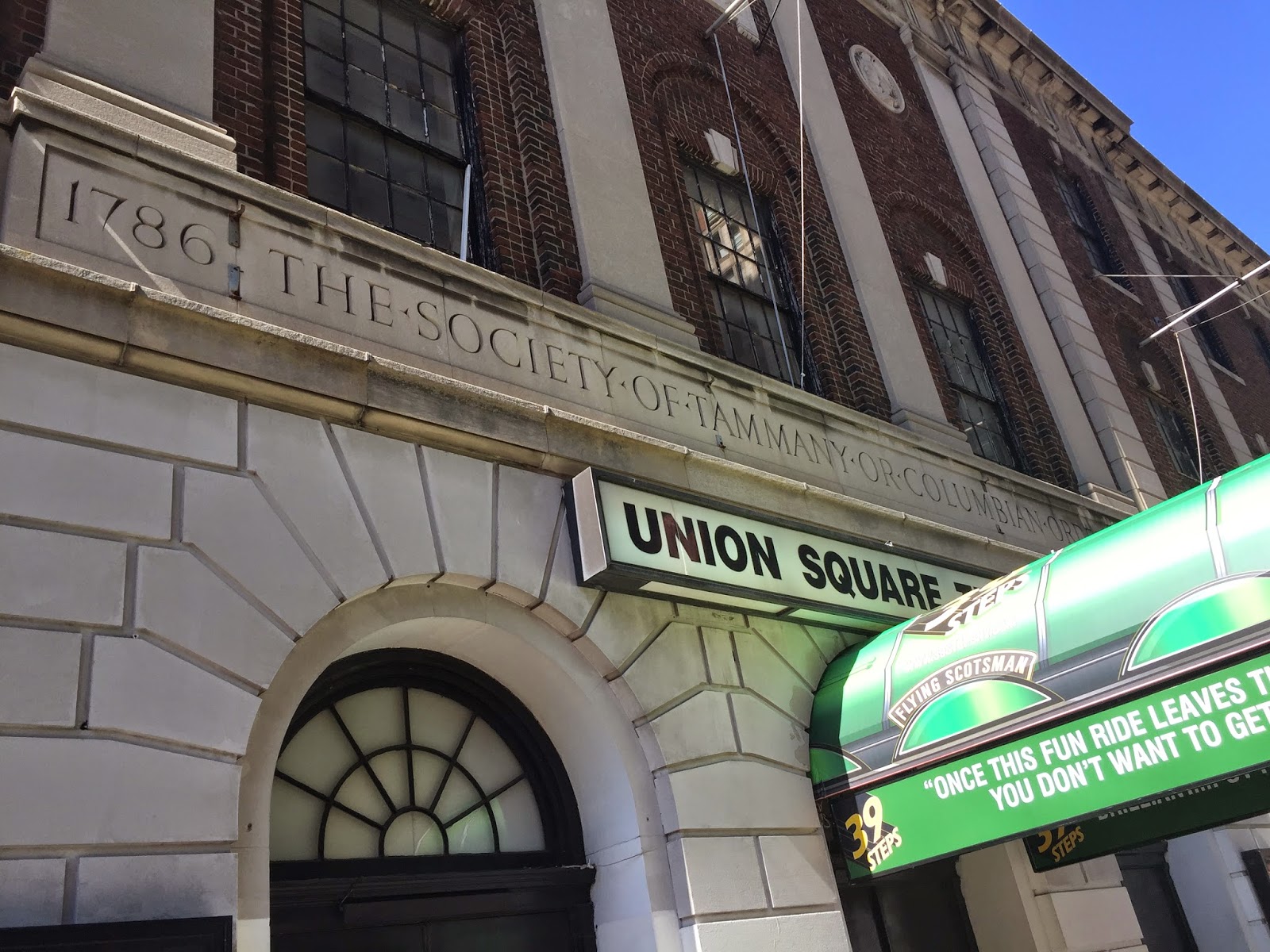 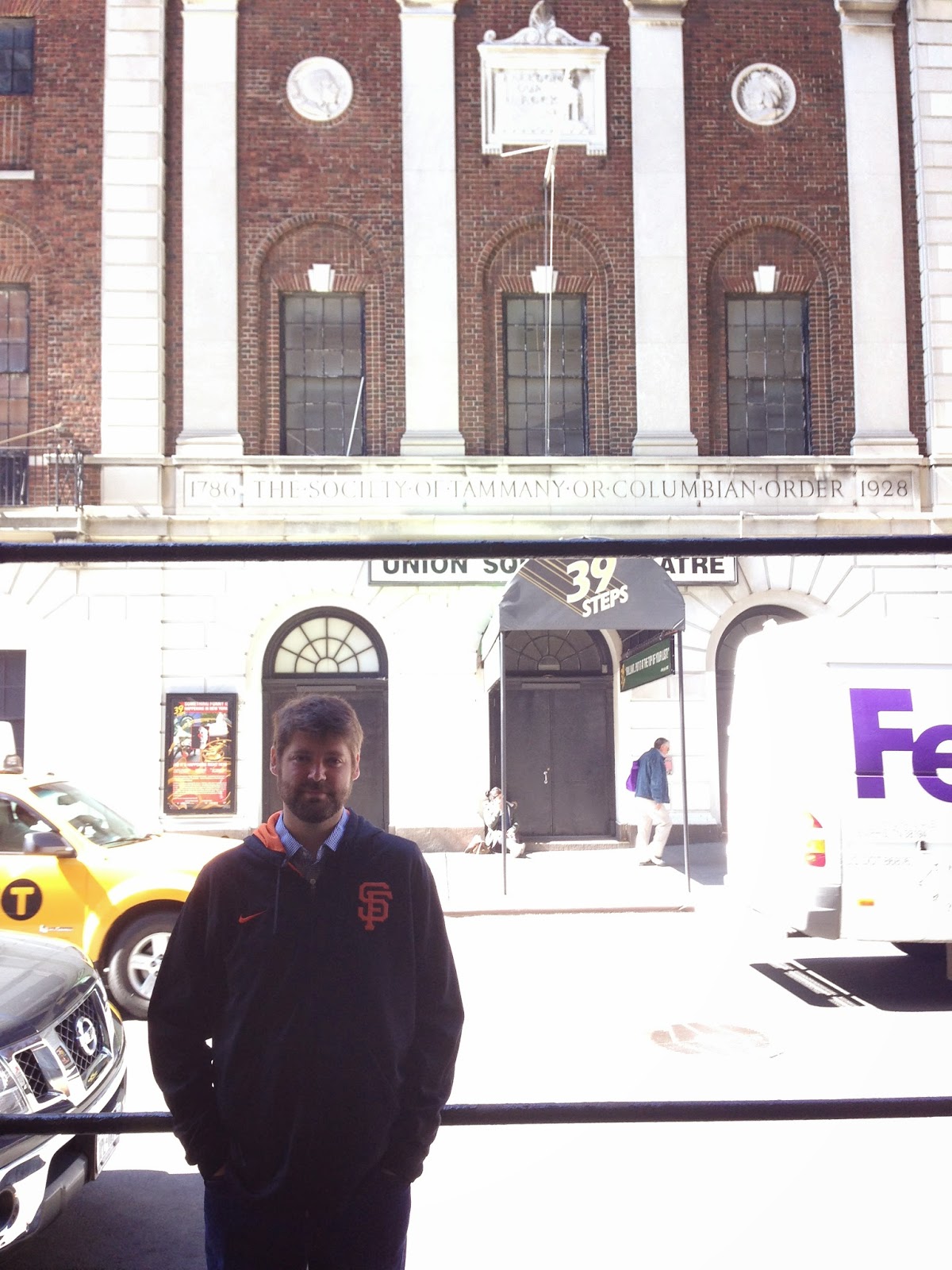 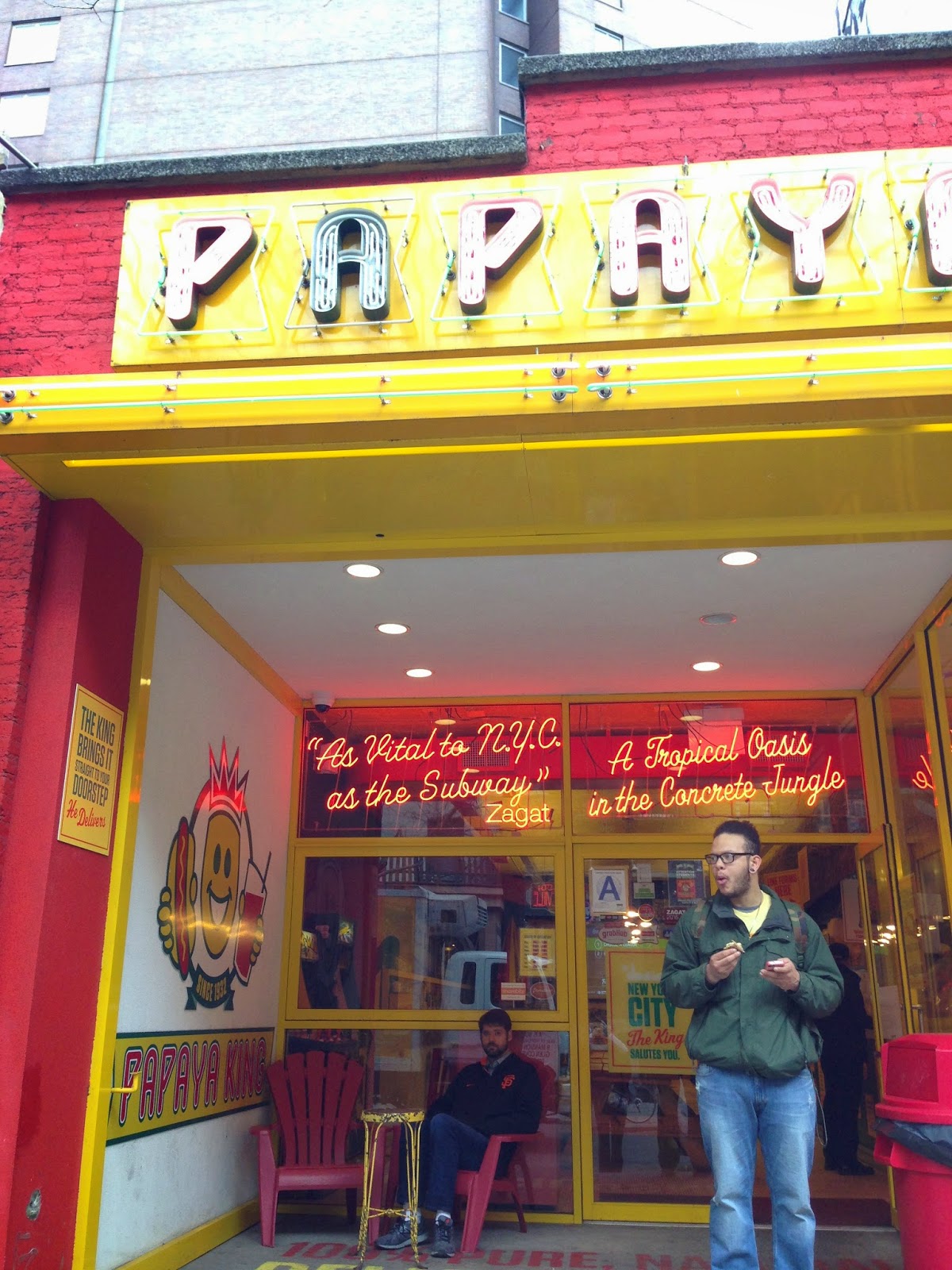 On the way we passed by some interesting shops and had to stop. First was Forbidden Planet, a comic book store on Broadway SE of Union Square. We also stopped in The Strand bookstore down the block to peruse the rare books on the 3rd floor. 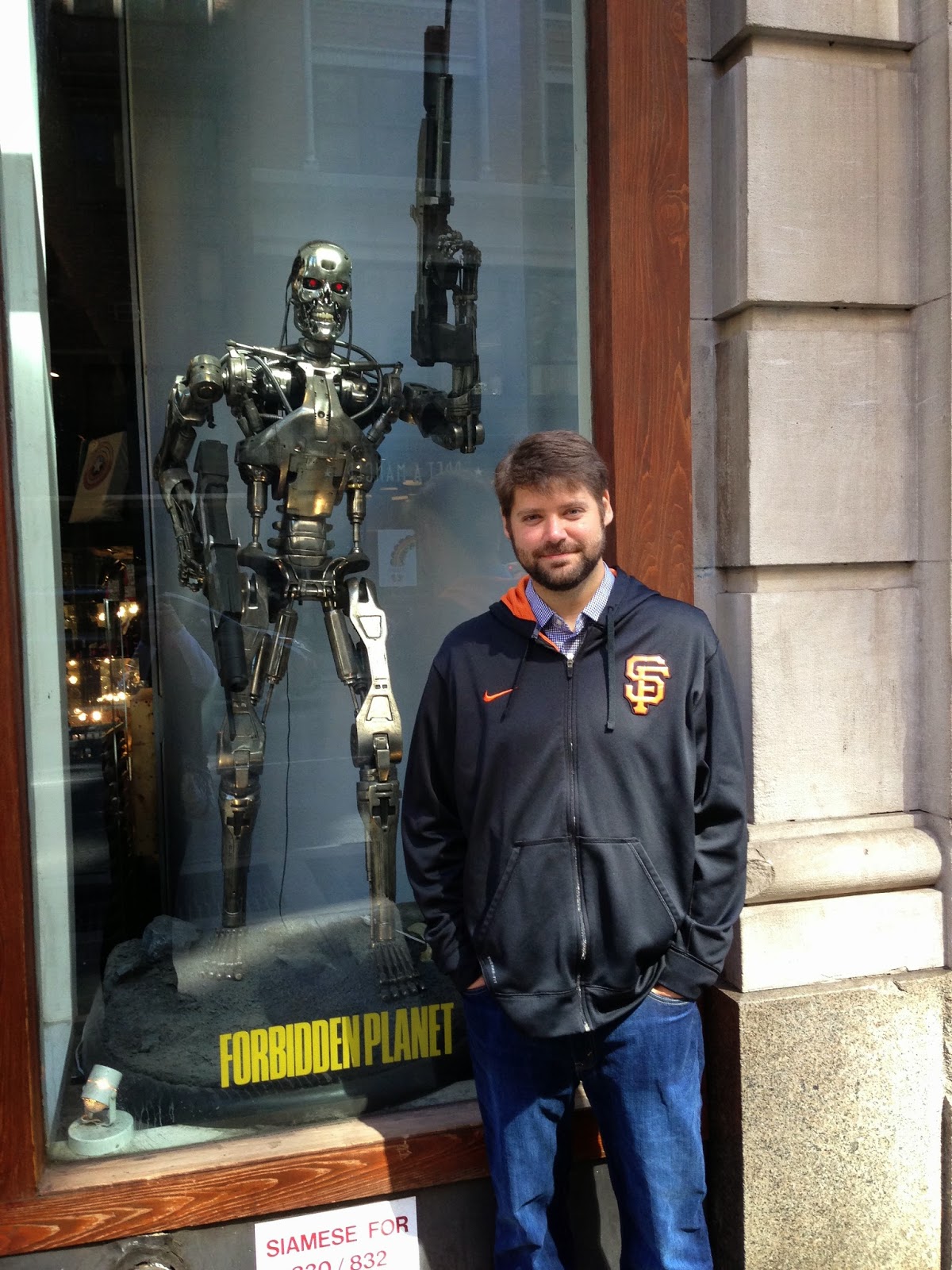 A costume store that takes up what seems like half a block? Yes, we must stop.
Along St Mark Place, while eating our hot dogs and waiting for Trash and Vaudeville across the street to open, who do we see? Helen Mirren walking down the street! She seemed to be exercising, and I abstained from accosting her.  St Marks Place was a very neat street, we went into Trash and Vaudeville and Search and Destroy, both punk rock vintage clothing stores.  The Ramones used to shop at Trash and Vaudeville, so we had to go in!

Ok, now to what you really want to hear about, food food and more food.  We made our way over to Momofuku Noodle Bar, located in the East Village.  (Hence our visit to the East Village). 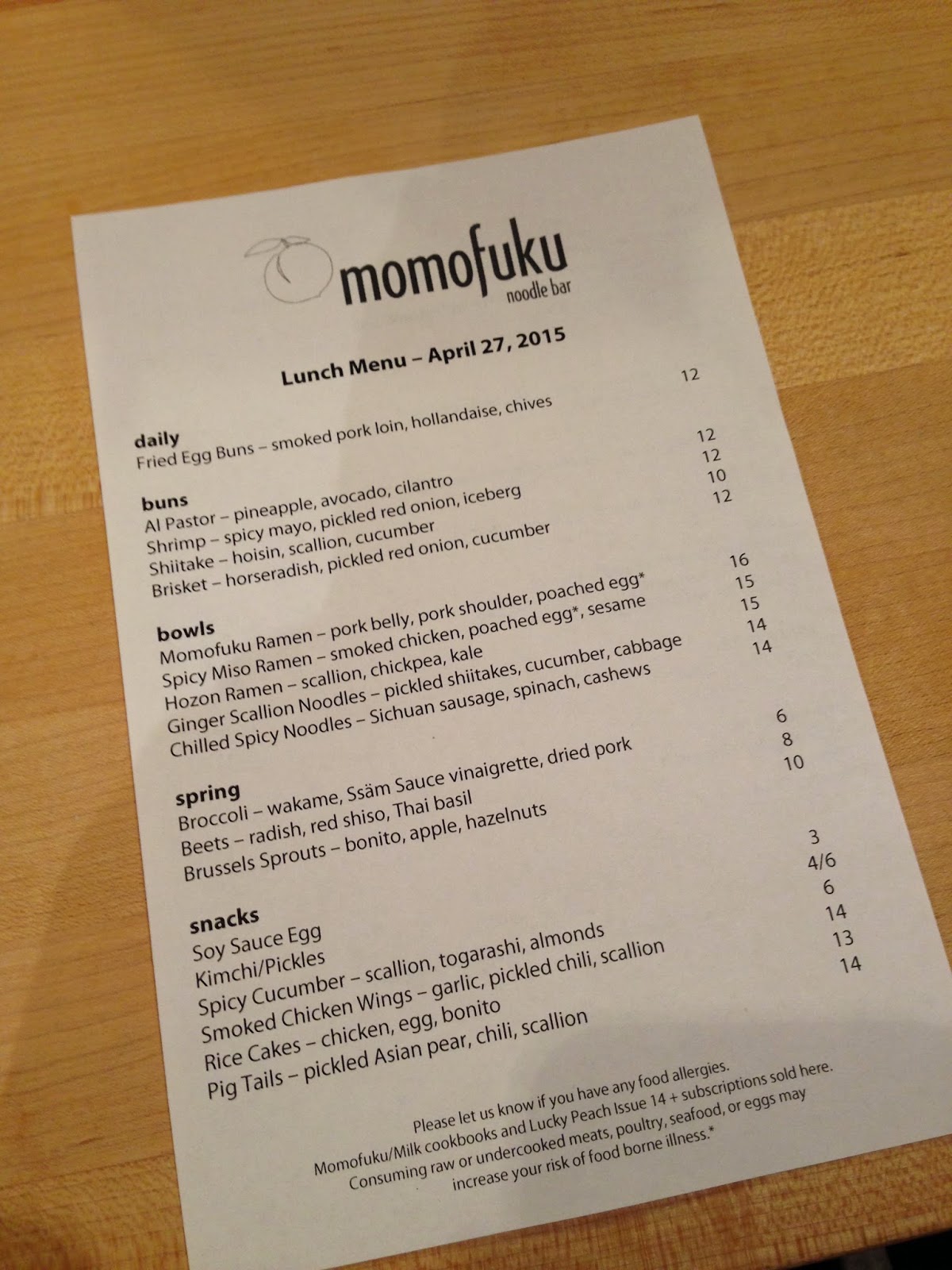 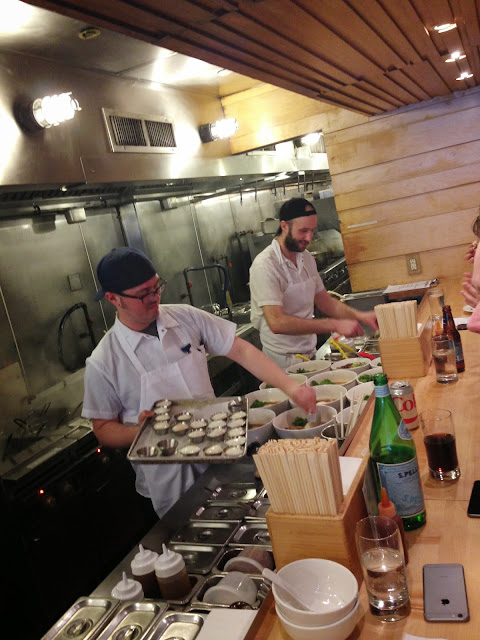 Momofuku Noodle Bar was nominated for Best Restaurant by the James Beard Foundation, not just for the Northeast but for the entire US.  There is a good reason for this.  It is freaking amazing.  I'm talking you need to leave whatever you are doing, get to NYC, go to East Village, and eat there. The broth is something like we've never had, the buns exceeded expectations as well, and the wings were icing on the cake.  We realized we probably should have shared a bowl after eating those appetizers, but hey, you only live one, and as you can see we cleaned our plates anyway.

I was worn out after this meal and exploration of Union Square and East Village neighborhoods, so yours truly headed back to the hotel post haste to rest.  This was my first big test for my back, and so far so good, but lets not push it I say.  Zac walked back and ran into Chuck Shumer!  There is a story there, but I'll let you ask him.  They are best friends now. 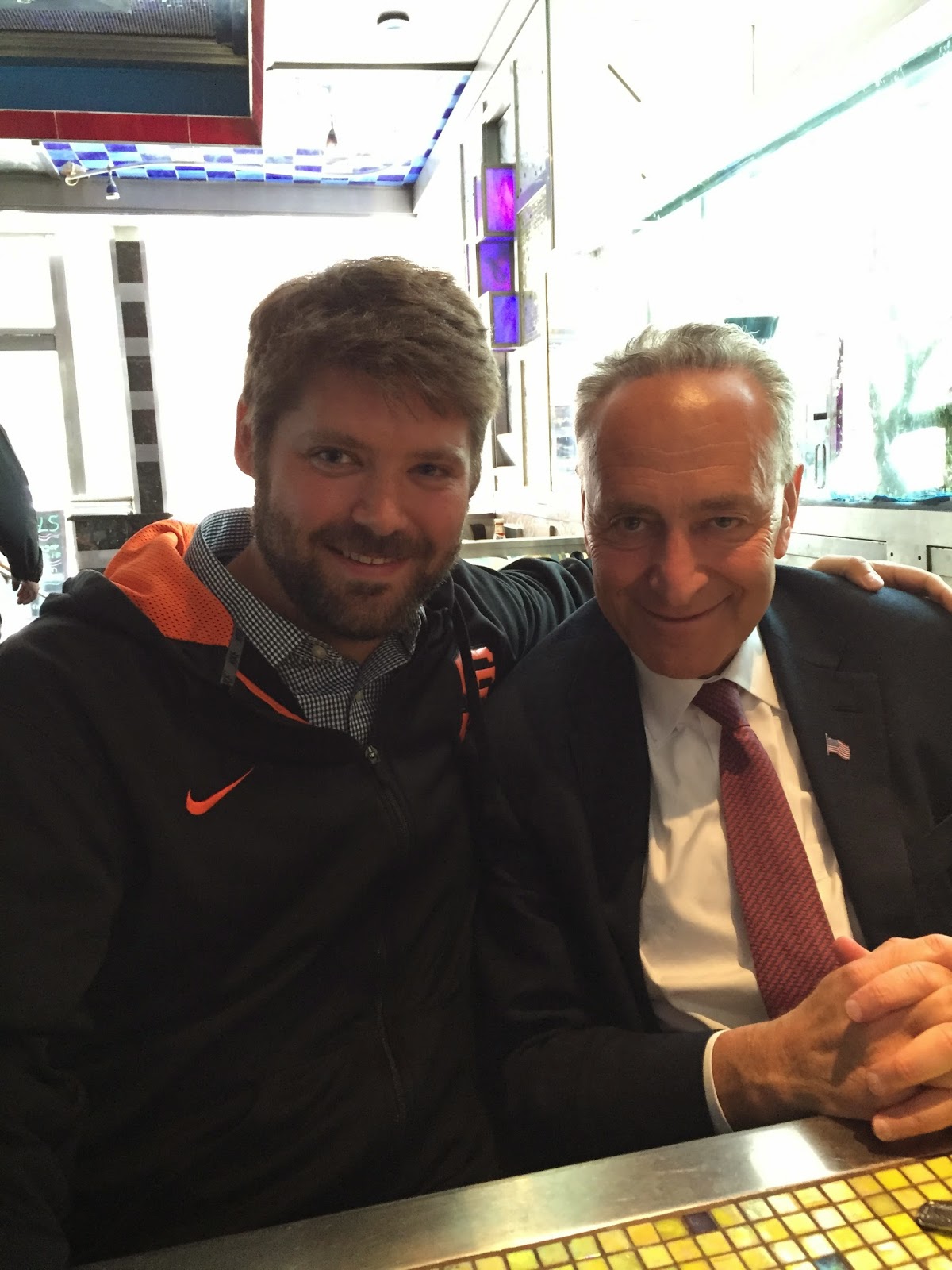 Our plans for the evening centered around ending up at Mario Batali's Babbo at 8pm. Babbo is located in Greenwich Village.  Neither Zac or I have spent much if any time in Greenwich Village, so we gave ourselves plenty of time to browse and see the main sites, Bleeker Street, MacDougal Street, Cafe Wha?, Comedy Cellar, and any other surprises along the way. 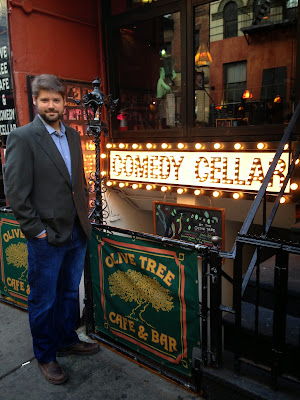 One of the coolest things about our trip was all the unexpected moments.  So there we were.....(Zac loves stories that start that way) walking down MacDougal street in the hub of Greenwich Village. I look up and what do I see? The Empire State Building!  I turn around to take in the area more, and look! there is the Freedom Tower!  So from that one block anyone has the perfect view of two NY landmarks.  Wow.  I was impressed as you can tell. 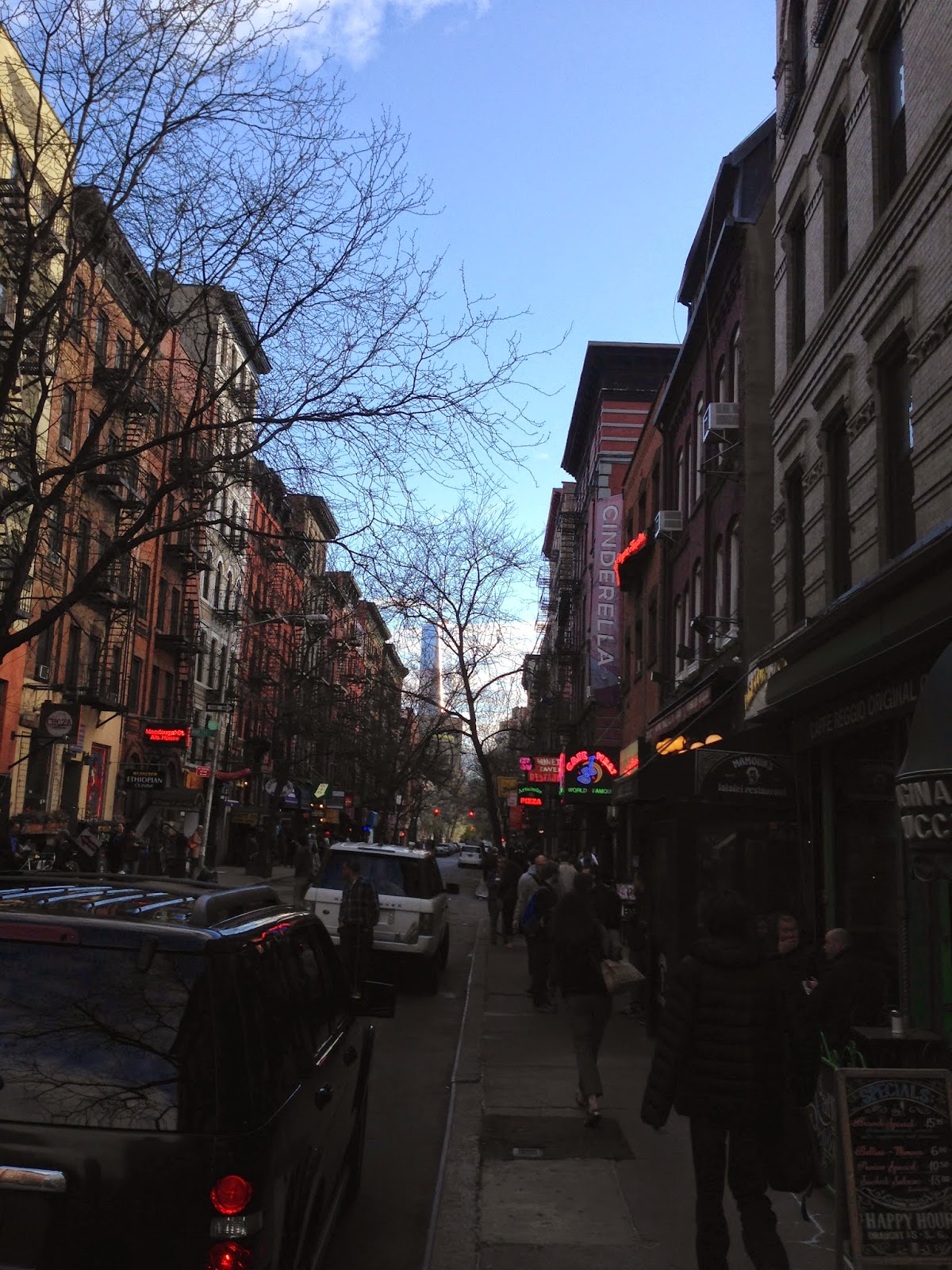 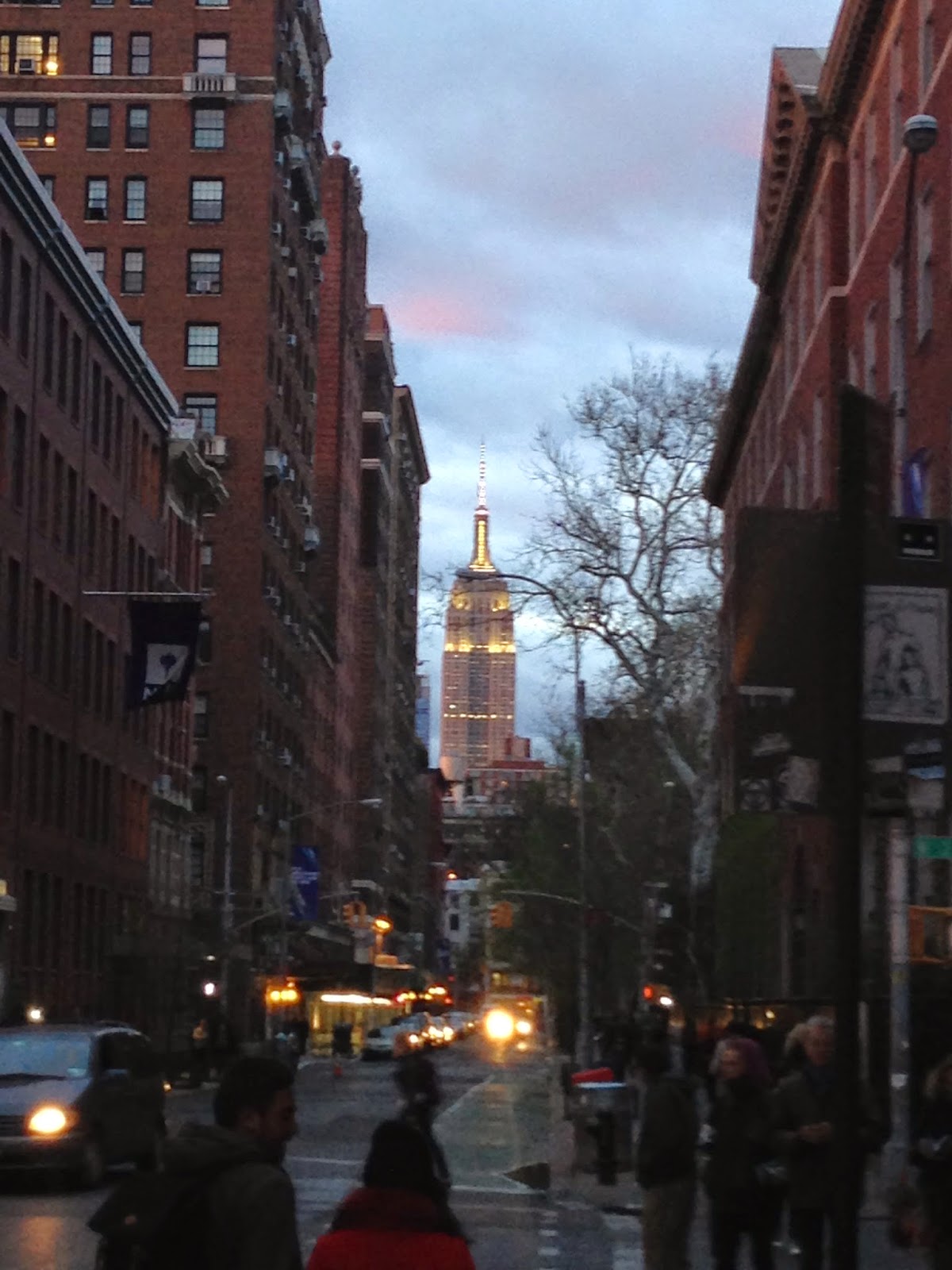 It's nearing 8pm by now, and we are hungry. Off to Babbo!  Babbo is just off Washington square on a very quaint and quiet street.   Once we stepped in side we were right in the middle of a very bustling and happening place!  Was not expecting ACDC greatest hits album to be playing in the background while we were eating, that's for sure! 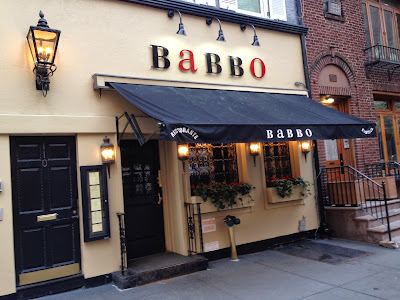 We did a full meal with each ordering Antipasti, Secondi, and Primi courses.  Passed on the dessert, you'll see why soon!


My personal favorite among our Antipasti was the octopus, but I LOVE grilled octopus.  At least the first and only other time I've had it, which was at The Optimist in Atlanta, GA, chronicled here. 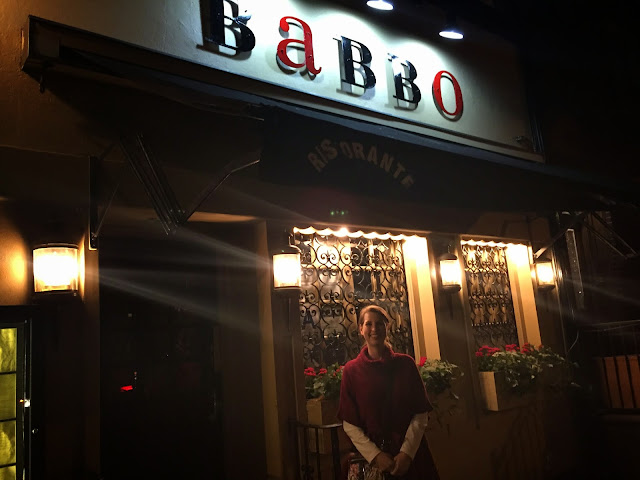 Overall a very nice meal at Babbo, no Mario Battali sightings, but didn't expect it.

We skipped dessert at Babbo because we had ice cream on the brain, Big Gay Ice Cream that is! One of the two locations of the Big Gay Ice Cream Shop is just a couple of blocks from Babbo further West from Washington Square. 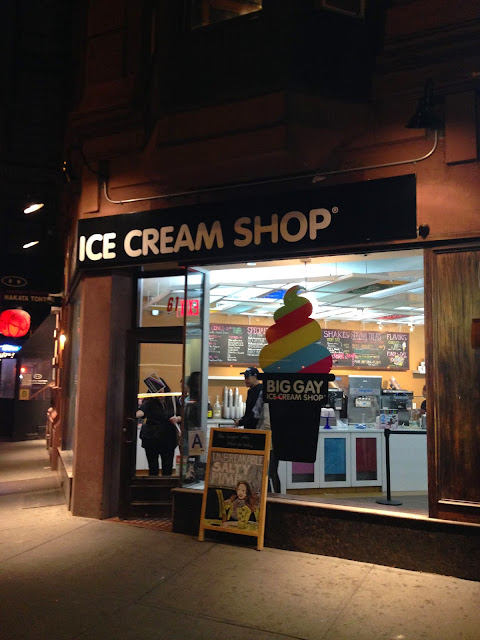 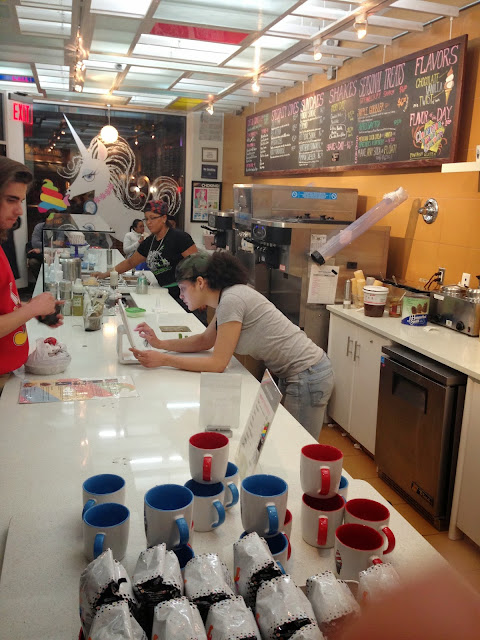 A display of some sort of "what do to do if you or someone around you is choking" poster was displayed at many of the establishments we visited.  None was quite as memorable at this one!  The other quite noticeable unique aspect of the Big Gay Ice Cream Shop is the fascination with all things The Golden Girls.  Someone is definitely a fan. 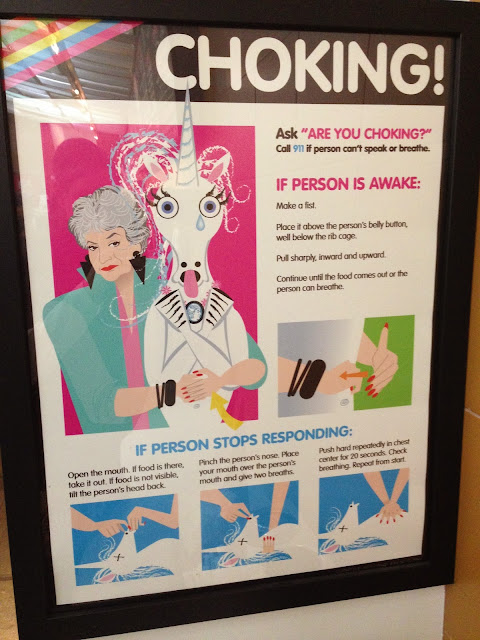 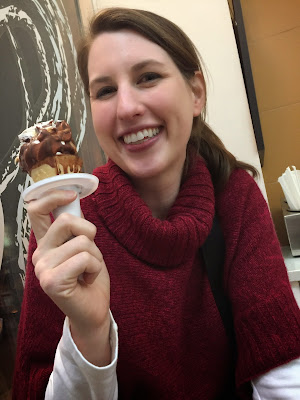 We ordered a salted caramel variety of the vanilla dipped cone to share.  Should have ordered one each!   This location is very close to several subway lines, so if you are in NYC be sure to stop in a get a cone!  The ice cream was fluffy yet creamy, not too sweet with just enough vanilla.  In other words, perfect!

And that concludes Day 2 of our trip.  We could have ended it there and called it a huge success! Stay tuned for Day 3 - Exploring Flushing, dinner at Sushi Yasuda, and The Spot!