There is only one more day in 2012.  So, in the spirit of starting fresh in 2013, I'm devoting this post to all the things in 2012 that I had great intentions to blog about but never did. I'll start off on a sweet note with two sweet treats we made recently - Cake Pops and Meringue cookies.

For Christmas I received a Babycakes Cake Pop maker.  With the help of my husband we successfully made three dozen chocolate cake pops with vanilla glaze (some colored red), and some with sprinkles.  I'll say the cake part was very easy, and I definitely want to try other things with the Babycakes maker other than cake pops. The candy coating part was a bit trickier, but we had an efficient assembly line going and it turned out well. 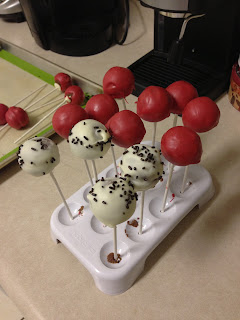 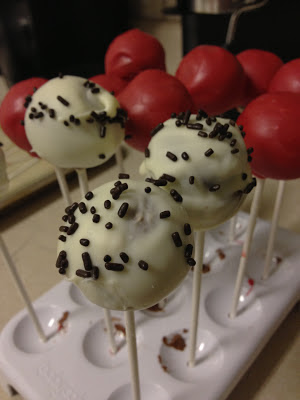 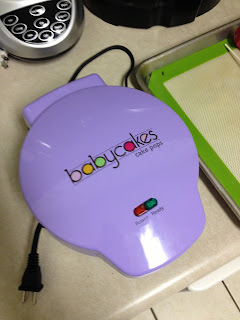 I attempted to make meringue cookies recently for the first time in 8-9 years.  The previous time (my first attempt) did not go well, and so I decided making these light and airy cookies was not for me. My mom makes them and they always turn out so well that I decided maybe my first attempt was a fluke.  Based on my recent results, maybe I'll be making more of these cookies again soon!  (And actually promised them as a gift, so I better be getting to it....).

Thanks to Pinterest I decided to get creative with my dish for our office Halloween party.  The most creative I've gotten in the past is to bring "Devil"-ed eggs, but they looked just like regular deviled eggs.  So I really just got creative on the sign up sheet. This year I made Mummy dogs and I must say I was quite impressed with how well they turned out.  Steps: cut crescent roll dough into strips, cut sliced cheese of your choice into strips, and cut hot dogs in half.  Wrap hot dogs with cheese, then dough, bake, and dot some eyes with mustard. 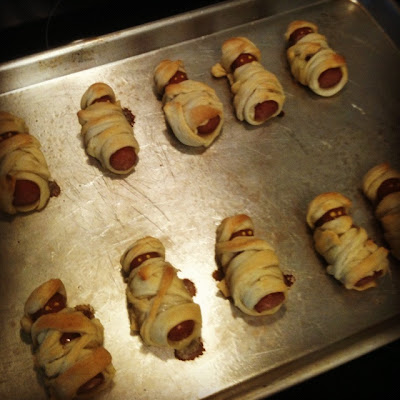 Yes, we get some flops of dishes around here from time to time. Sometimes by no fault of our own, just ends up being a not so tasty or incorrect recipe.  Then other times, it's just not meant to be no matter how highly the recipe is rated and how exact you measure the ingredients.  The biggest flop award for 2012 goes to....German Chocolate cake I made for my mom's birthday.  Not only did it not come out of the pan, it really didn't taste that great either. So, thankfully I had a backup box of devil's food cake mix on hand, so I still was able to arrive at her party with a nice "homemade" cake! (Oh, and the homemade icing did turn out great!) 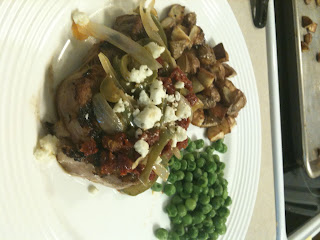 I do a majority of our grocery shopping at Publix.  They have an area of the store where someone makes food, lets you sample it, hands out the recipe card, and has all the ingredients you need in a case right there next to them.  Most of the time this is what happens: I see free food, I eat the free food, I comment how good it is and take a free recipe card, then promptly never look at the said recipe again or buy any of the required ingredients.  However, one day this summer they had Ranch Marinated Steaks.  I decided to make them since it was rather good, the ingredient list was short, and it looked rather quick to make.  It was a success!  Will save this for when we are craving a big juicy slab of meat.  Recipe can be found at the Publix website here.

I discovered Baked Oatmeal earlier this year. It's so good and easy!  The recipe I use is from the blog Stacy Makes Scents.  Sometimes I throw in fresh blueberries if I have them on hand (which is basically all summer).  I like to make this on Sunday afternoon, then wrap up some for breakfast each morning as I run out the door for work.  Good with or without syrup on top! 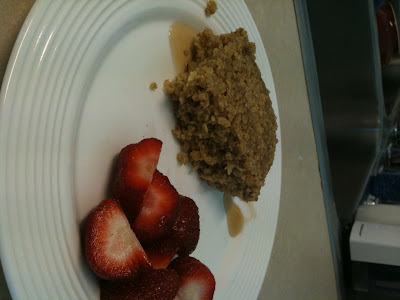 Two new crockpot meals I discovered this year and love are Mexican Chicken and Beef Pepperoncini sandwiches. For the Mexican Chicken, I didn't take a picture. Here's what you do - take one package of boneless chicken breasts and put them in a crock pot.  Sprinkler 1 envelope of taco seasoning over the chicken, then top with 1 jar of your favorite salsa. Cook on High for 4-6 hrs or Low for 6-8 hrs.  When it's done shred the chicken with a fork.  Use for tacos, nachos, or however you'd like!

Next up is the Beef Pepperoncini sandwiches.  I found the recipe on the Krazy Coupon Lady website. Great to make when the beef goes on sale! When the meat is done, shred it up and put on rolls of your choice with a slice of cheese.

Since I started off this 2012 summary/hodgepodge post with something sweet, why not wrap things up with something else sweet!  I am a huge fan of anything coconut, including coconut cream pie. I've made this recipe a couple times and both times it turned out perfectly. The recipe is from Cooking Light (love this magazine!), so you don't feel too bad about having a 2nd helping!  Just looking at this photo again makes me want to go make one now. Except I really might make some baked oatmeal later, need some breakfast for this week..... 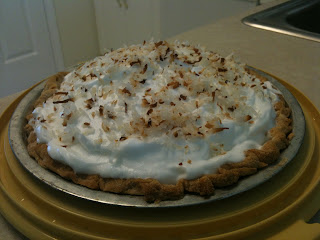