June 21, 2011 - First attempt at a Ham and Cheese souffle.  Used Hubert Keller's recipe (below), and watch his show before hand to make sure we had all the steps just right.  It turned out perfectly! Well, next time I won't fill up the souffle dish quite as much. 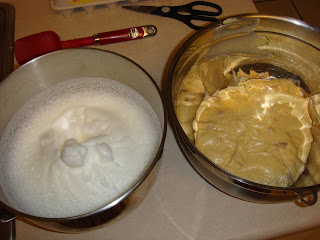 perfect prep is essential! This is after step 7, right before
the egg whites are folded into the batter. 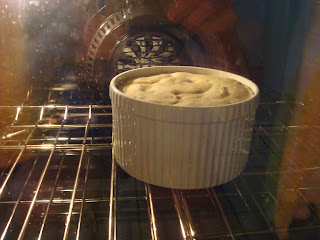 Use the oven light to keep watch, don't open the oven door! 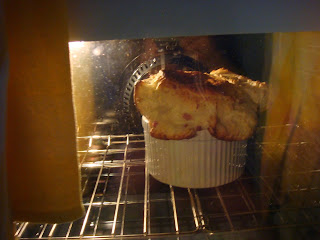 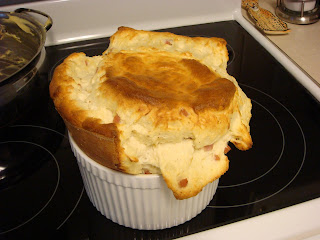 Directions:
1. Generously butter and flour a 2‐quart soufflé dish. Remove any excess flour.
2. Preheat the oven to 400°F.
3. In a medium saucepan, melt the butter over medium heat. Whisk in the flour
and stir for approximately five minutes to make a roux. Add the milk slowly
and whisk until the mixture is very smooth. Continue whisking over
medium‐high heat and cook until the mixture comes to a boil. Continue
cooking for 4‐5 minutes until the mixture gets very thick.
4. Remove from the heat and whisk in the egg yolks one at a time until fully
incorporated.
5. Using a wooden spoon, mix in cheese until melted. Add chopped ham, and
season with salt and pepper.
6. Transfer the mixture to a medium mixing bowl.
7. In a separate bowl, whip the egg whites with an electric mixer on mediumhigh
speed to soft peaks.
8. Using a rubber spatula, transfer ¼ of the egg whites into the soufflé mixture
and stir until fully combined.
9. Add half of the remaining egg whites and fold gently together until mixture is
smooth. Add the remaining egg whites and fold in gently, being careful to
keep the airiness and lightness of the mixture.
10. Spoon the mixture into prepared soufflé dish, and bake 40 minutes or until
soufflé raises and is golden brown. Serve immediately.