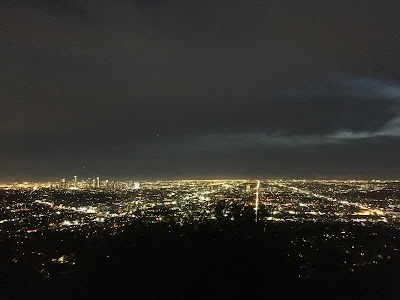 What a great trip!  This is the last post of our great LA Vacation of November 2018, includes our last full day and final morning before we traveled back home.  You can check out the rest of our trip at the links at the end of this post.  On our last day, we landed Jimmy Kimmel tickets (free, just sign up on their website and it's a lottery system), so planned our day around that.  Just a few days before they announced surprise guest former First Lady Michelle Obama!!  Believe it or not, this was going to be our 2nd time seeing her on a late night show, and we've only been to 3 total!   In 2015 we were lucky to get tickets (free but a lottery system with some trivia involved) during David Letterman's final weeks of The Late Show.   Then current First Lady Michelle Obama made a surprise visit.  Lucky us!!

I actually started the day with a salon visit to the Beverly Hills Waldorf Astoria Spa and Salon, we were staying at the Waldorf (check out my earlier posts for more on that total awesomeness).  I wear my hair in a pony tail 99.99% of the time.  However that day, decided if I'm going to share air with Michelle Obama, maybe I need to put forth little more effort.  Five stars to the salon!  I wish I could replicate what they did.  It was fun getting pampered.

We had to be in Hollywood at the El Capitan for the taping in the early afternoon (extra early for this taping for security). For lunch we went to Jitlada, a Thai restaurant in Thai Town / Little Armenia. All the credit goes to Zac for discovering it.  Jitlada has been called the best Thai in LA, and one of the best in the US by some critics.  If you Google it you'll see it's a celebrity hot spot as well, for those celebrities that know good food!


We got three dishes to share, although I'll go ahead and admit I didn't share much of mine....We got Pad Thai, Thai Wings, and a classic Thai dish of Dungeness crab in garlic sauce.  That crab was gigantic!  (I ordered the Crab.  I am naturally drawn to dishes that are incredibly messy and involve eating with ones hands for some reason).

Thai town isn't too far from the main drag in Hollywood.  Off we went to the El Capitan theater, an iconic theater built in the 1920s, built about the same time as the Chinese theater that sits right across the street. 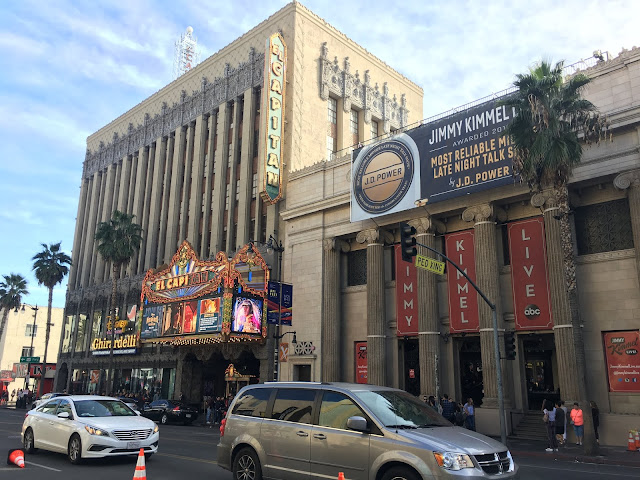 The show was a lot of fun.  The room where the show is taped felt quite small. It is definitely smaller than the Ed Sullivan Theater where we saw Letterman.  Probably more normal for a TV show set, but then what do I know really.  We ended up on the back row, but dead center.  Since it was so small, the back row still felt like a great seat.  We couldn't take any pictures inside unfortunately, but I did find this picture below off the official show site, and found us immediately!  My red shirt helped. 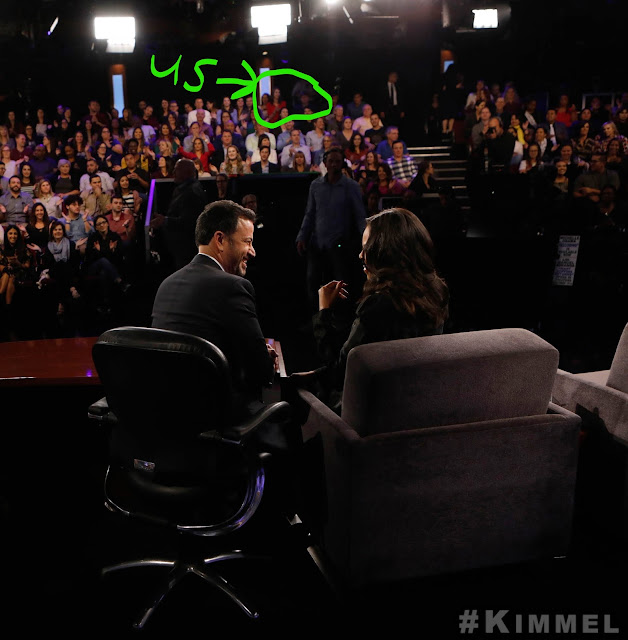 Lin-Manual Miranda was the 2nd guest, and was fun to see.  After the show it was time for a snack!  Ghirardelli had an ice cream shop attached to the theater, so we stopped in and shared a sundae. 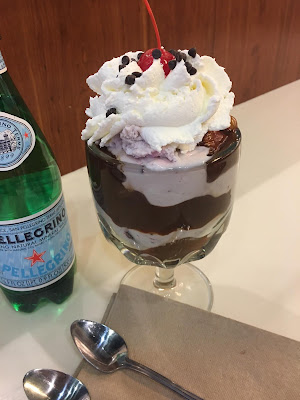 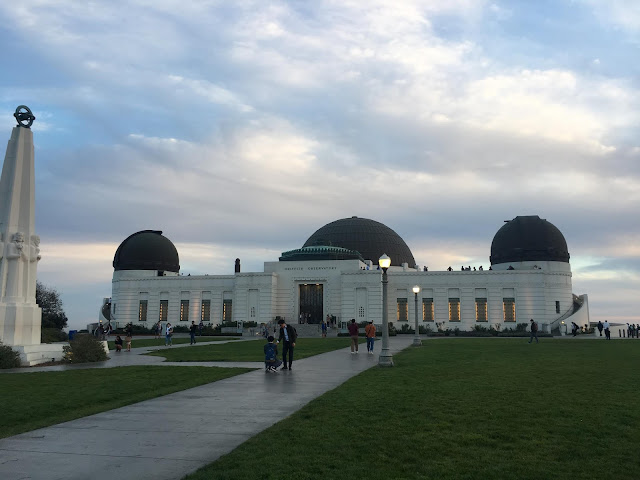 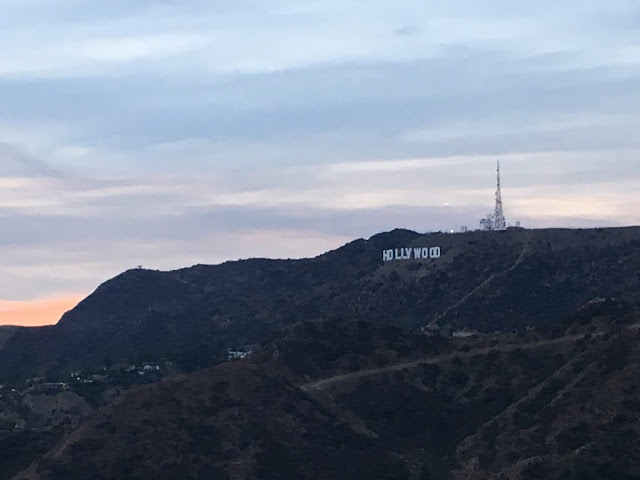 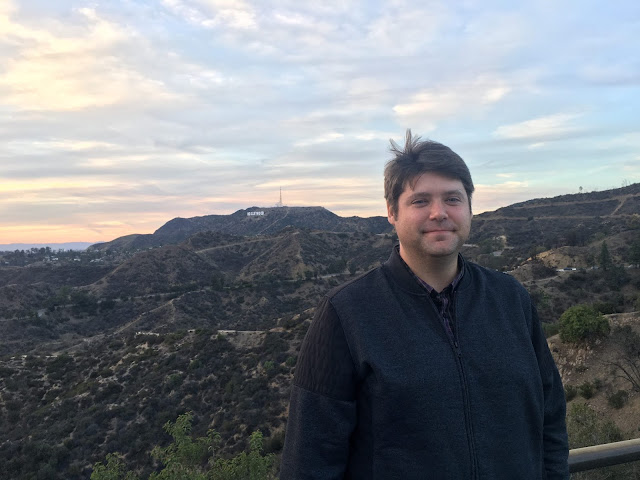 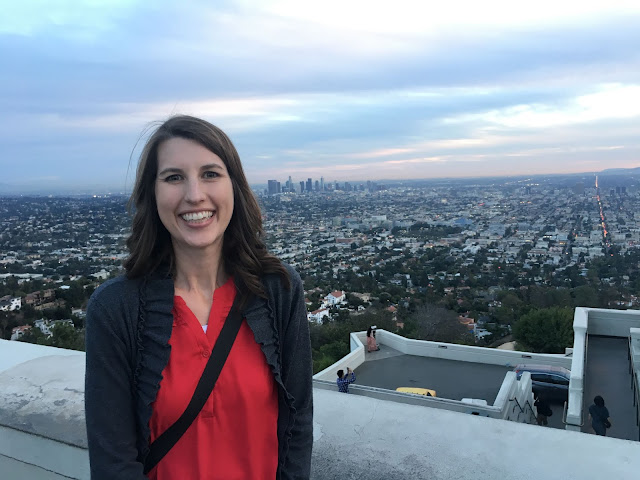 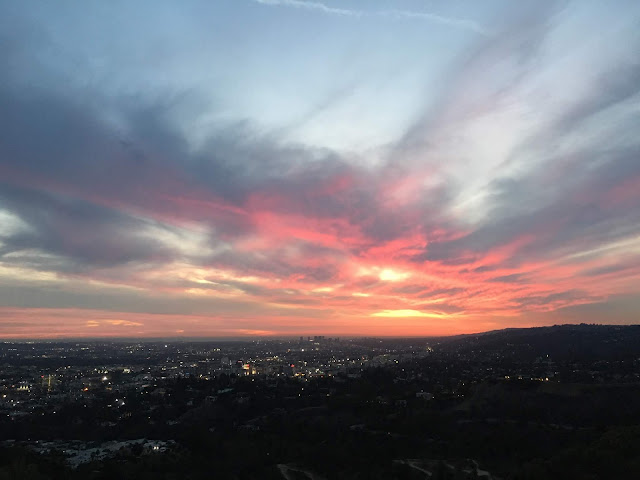 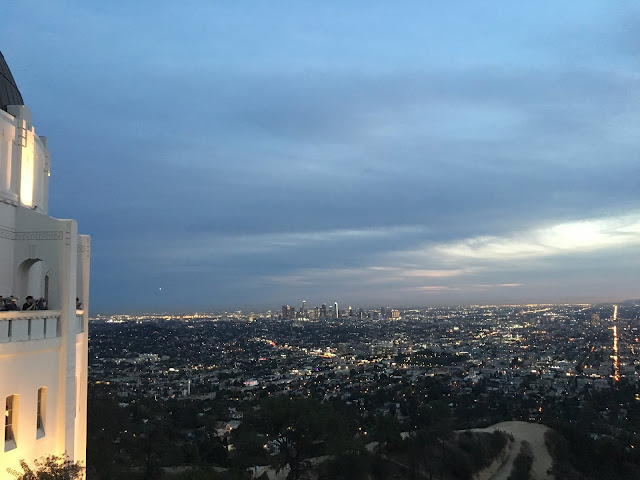 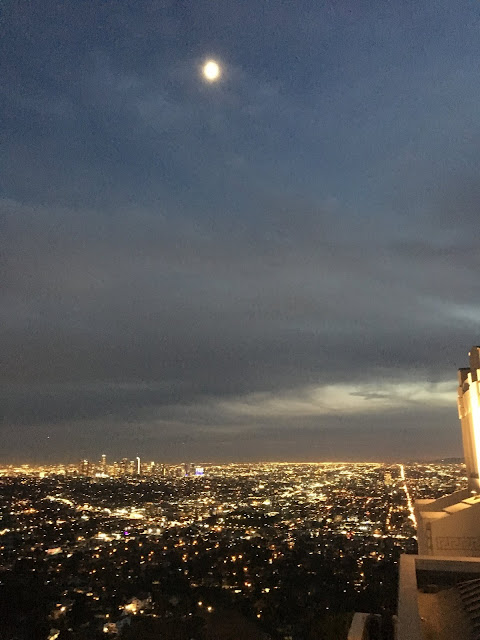 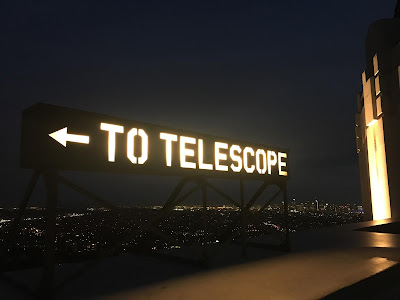 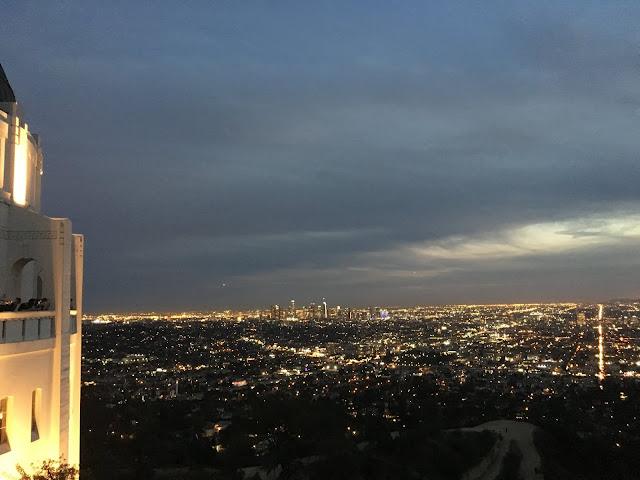 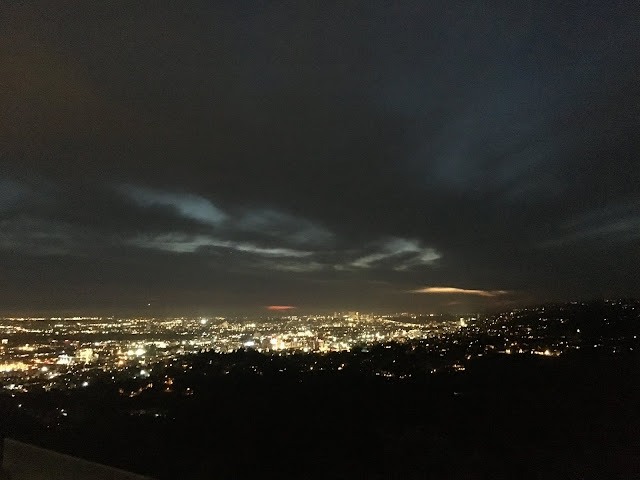 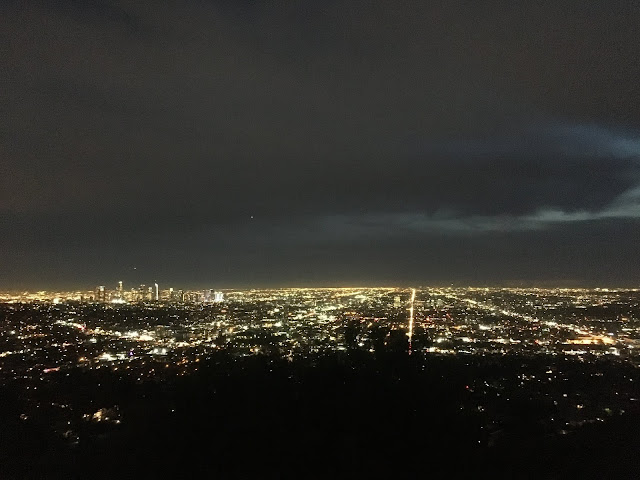 All that gazing worked up an appetite for dinner.  A trip to California is not complete without an In-and-Out Burger fix, so off we went! On the route from the Griffith Observatory back to Beverly Hills is the In-and-Out by Hollywoood High, our destination. 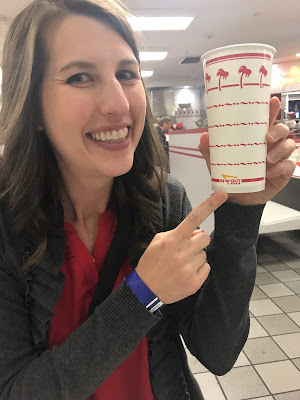 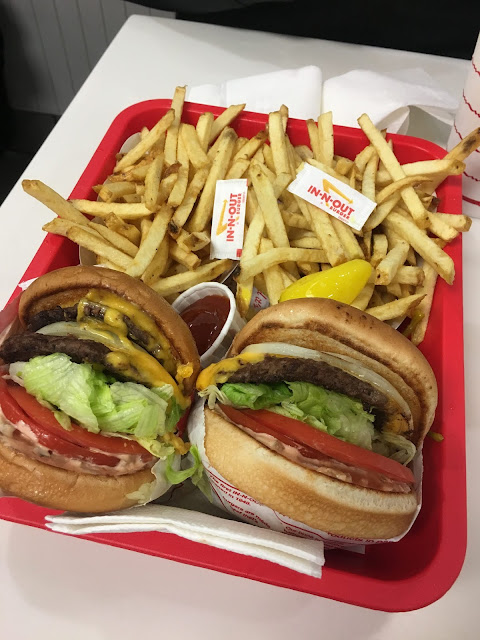 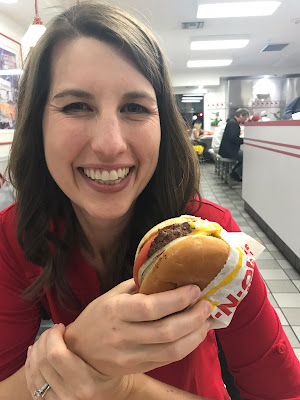 In Part 3 of our trip I talked about our ride in the hotel's brand new Rolls Royce Phantom.  Here's a good shot of both of them parked outside our hotel on that last night.  Tried to play it cool, but I'm sure our driver could tell how excited we were to be chauffeured to dinner in the ultimate of luxury. 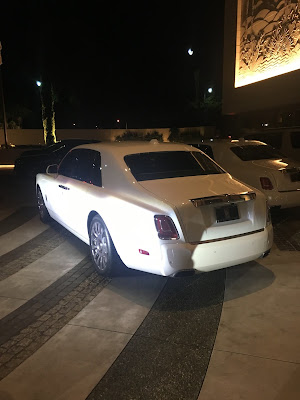 Going out with a bang on our last night, we stopped in at Jean-Georges Beverly Hills, the upscale restaurant at the ground level of the hotel.  We had not yet spent out $50 hotel credit for the day, so why not spend it in one sitting on all the desserts. 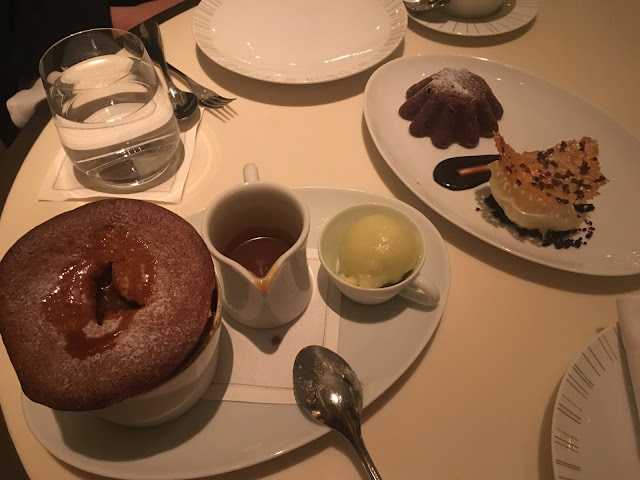 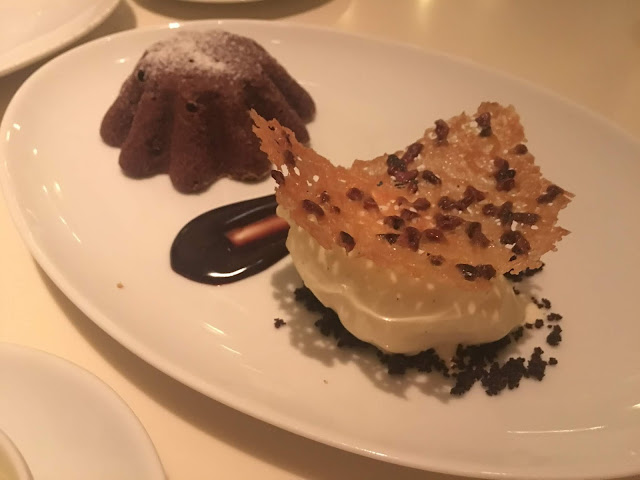 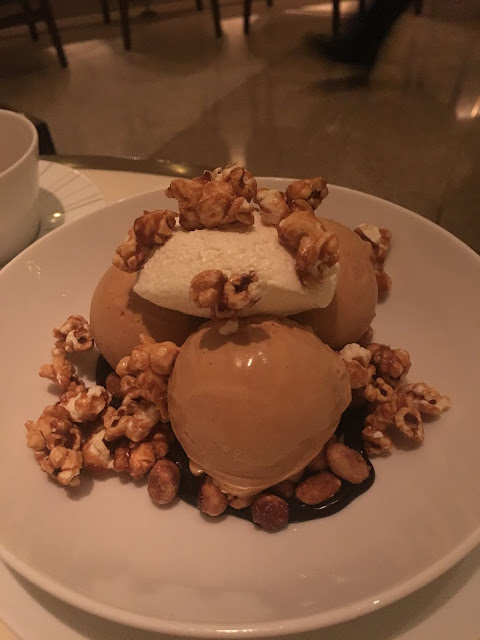 Our final morning we enjoyed a nice leisurely breakfast at Jean-Georges, and then ventured up to the rooftop pool area one last time to take in the views and perfect weather. 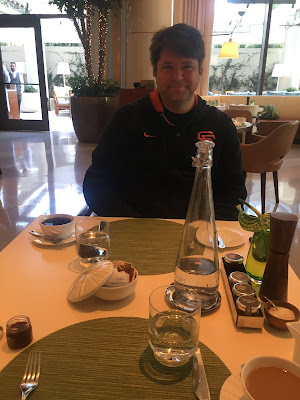 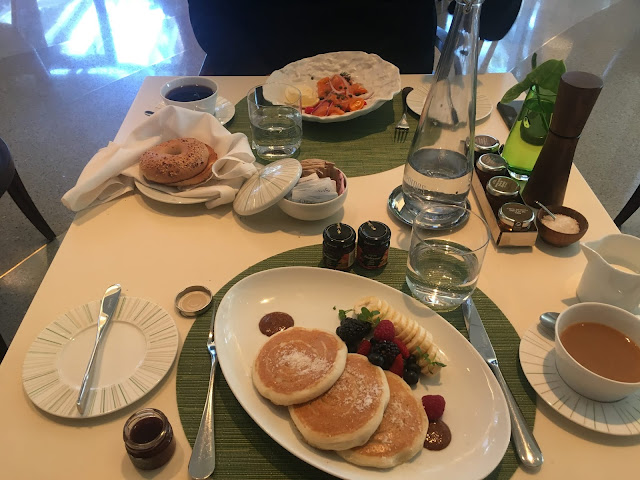 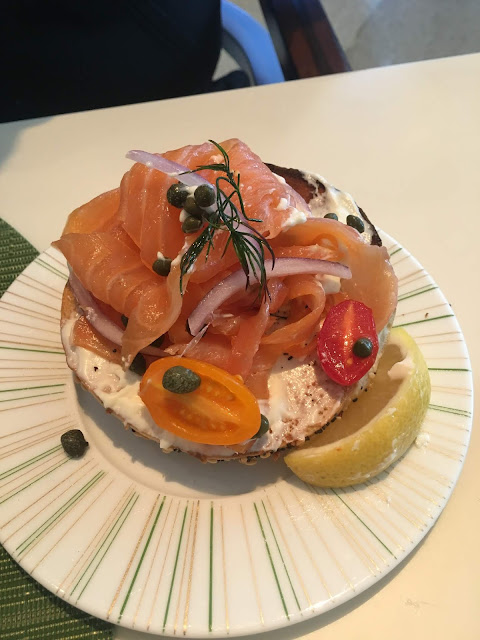 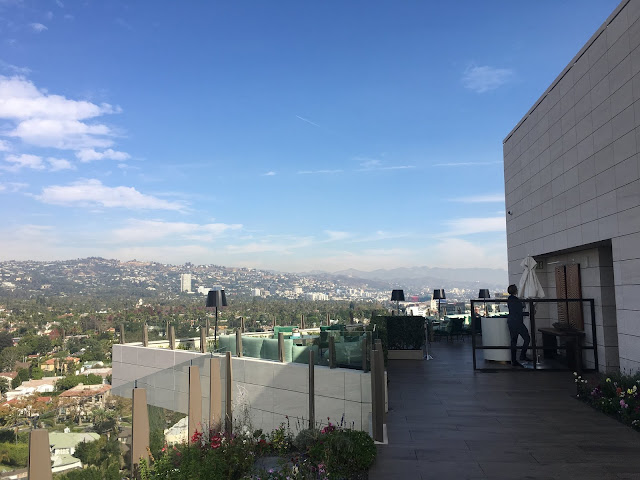 We had an amazing trip, and lived in ultimate luxury at the Waldorf Astoria Beverly Hills for 6 nights.  No complaints whatsoever about LA, even the traffic was manageable.  It helped that we slept in every day so missed morning traffic, and planned our day to avoid being on the road during evening rush hour.  Great food, great sites, great views, and perfect weather.  Until our next adventure.....