Here we are on Day 3 of 6 of our Los Angeles Vacation Extravaganza that was the week of November 11-16th of last year.  Check out Day 1 and Day 2 here.  Lots of good eats and fun sites on Days 1 and 2, and we kept it up!

Per our m.o. for the week, we got up quite leisurely.  First up we met a friend of Zac's for a late breakfast/early lunch (yes that's technically brunch, but does brunch exist on a weekday??) at Canter's Deli on Fairfax. It's been around since 1931, serving up authentic and traditional Jewish fare.  UPDATE:  I recently watched an episode of Jerry Seinfeld's shows Comedian's in Cars Getting Coffee, and he and Seth Rogen dined here on the show. Seth Rogen is apparently a regular.  Cool! 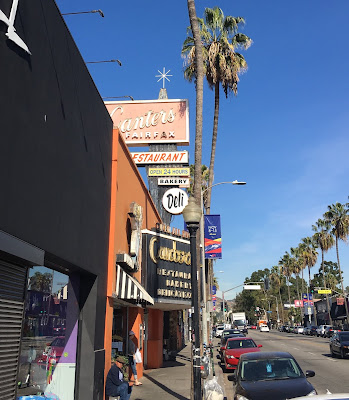 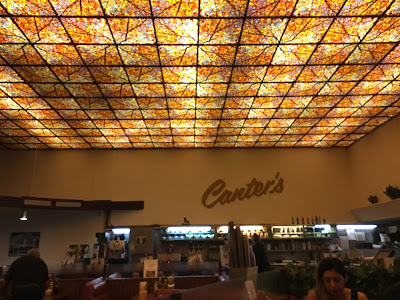 As if that wasn't enough, we decided on some bakery items to-go to enjoy later.  Ok it was 20 minutes later......

We took a short walk from Canter's down to the Original Farmer's Market, founded in 1934, and a historic landmark in LA.  My grandparents took my mom here as a kid when she'd come to visit them! 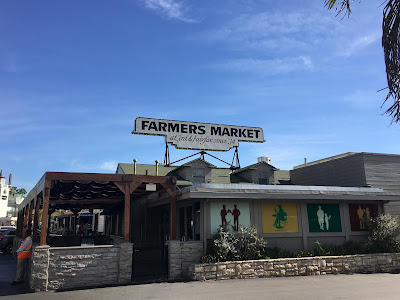 Next up was the La Brea Tar Pits and Museum, which was another very short walk from the Farmer's Market.  I can remember visiting this a kid like it was yesterday - that tar smell!  I can remember how intense it was, and surprised that there was bubbling tar in the middle of a city, with fossils in it (which I also thought was super cool as a kid, and still now).

On the way we walked through/past this giant rock exhibit behind the LA County Museum of Art.  See I'm levitating the rock above my finger.... 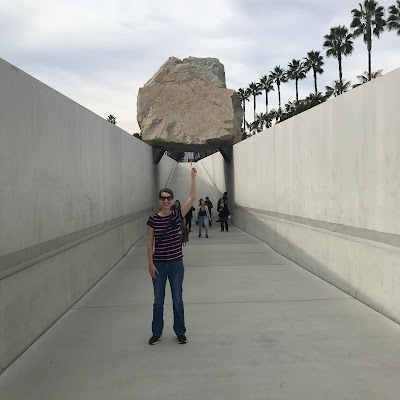 This was a GIANT structure under construction behind the Academy Museum of Motion Picture.  Death Star? 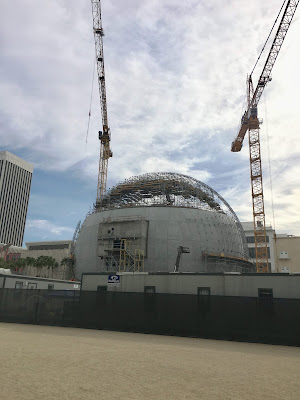 And we are here! La Brea Tar Pits. Literal pits of tar bubbling up in the middle of the city.  Many moons ago the tar trapped animals, and they died, now there are lots of fossils here. 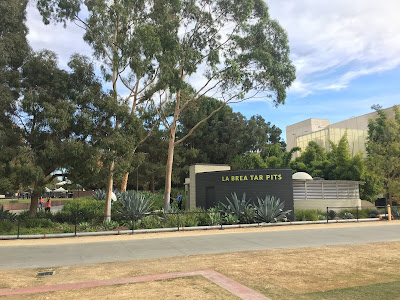 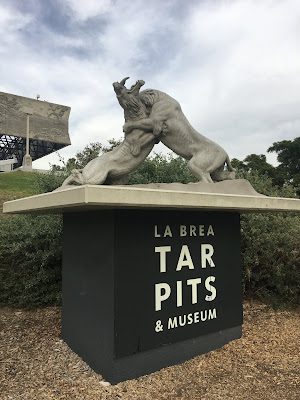 Now to head off to the Sunset Strip!  We Uber'd across town, and got out near the Roxy Theater.  We walked East down Sunset Blvd passing by the Roxy Theater, Whisky a Go Go, The Rainbow Room, The Viper Room, Tower Records (now closed), and The Comedy Store, ending our walking tour at Chateau Marmont.  Lots of pop culture history along that route! 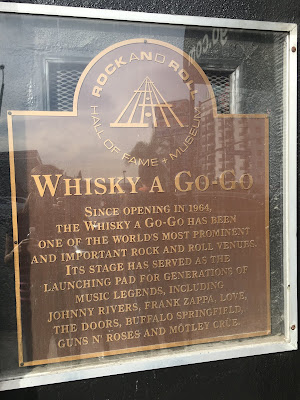 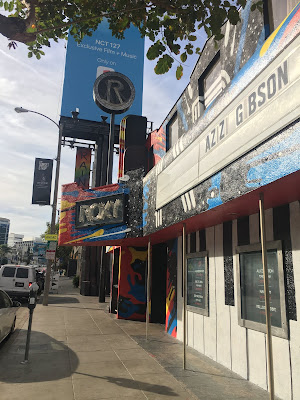 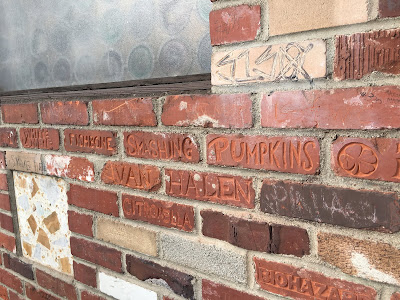 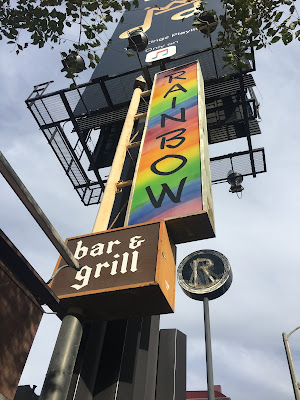 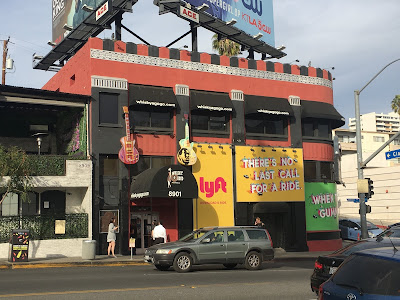 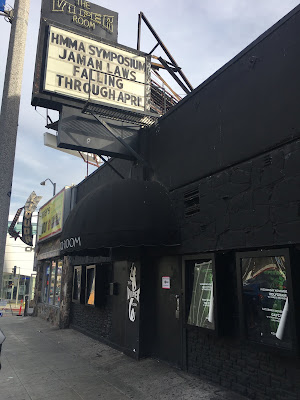 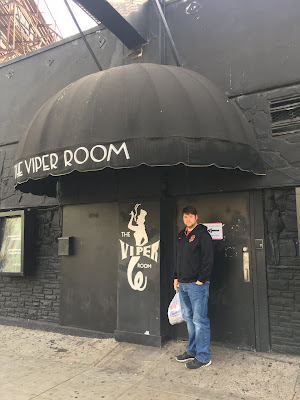 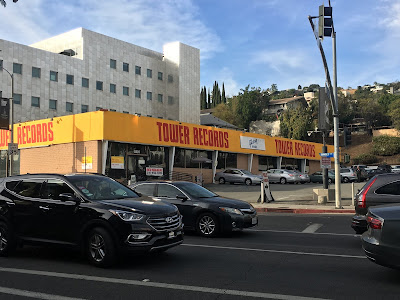 I had never heard of Chateau Marmont before our trip.  It's a hotel where a lot of famous people stay, it's expensive, historic, and well, it's got the word "Chateau" in the title.  It also has a fine dining restaurant and a bar.  Another fun fact: John Belushi died here in 1982 of a drug overdose.  After lots of time on our feet, stopping for some refreshments sounded like a grand idea.   Travel Tip:  If you think perhaps you are not supposed to be wandering around a posh hotel where there are possibly famous people, just act like you belong there and are famous yourself.  Usually works.

Another hint - when you DO see a famous person, DON'T FREAK OUT.  Just act normal and sneak a picture with your phone.   See the head in the distance?  Scroll down.... 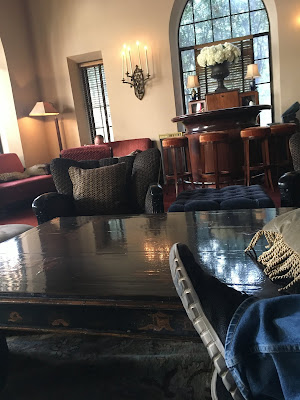 It's Jesse Pinkman! Or as he is also called, Aaron Paul. 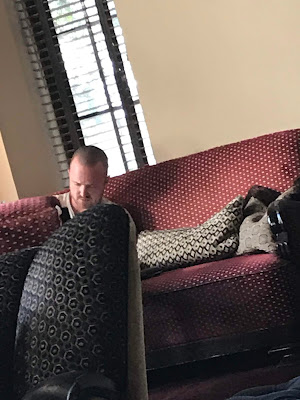 Time to rest. We head back to the hotel in time to catch another awesome Los Angeles sunset from the roof of our hotel, before thinking of dinner.... 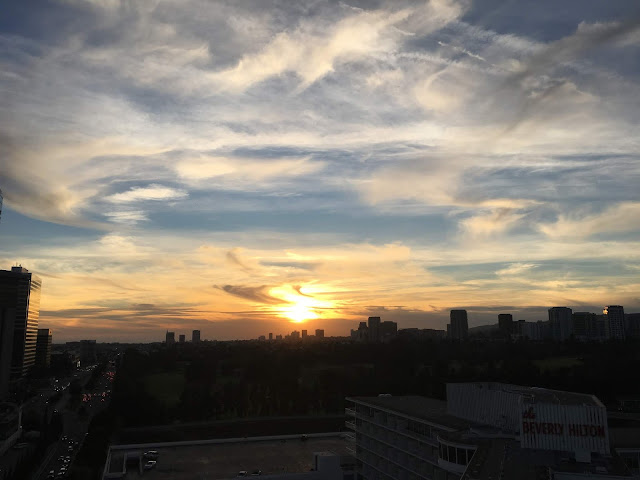 One perk of staying at the Waldorf Astoria Beverly Hills is they have a car service.  Not just ANY car service, your own personal ride to destination of your choice (within 5 miles) in a brand new Rolls Royce Phantom.  I had not heard of a Phantom before seeing it, but knew without a doubt it was super fancy.  MSRP of half a million dollars fancy.   So for one night, we were people who ride in the back of half a million dollar car taking them out for dinner in Beverly Hills.


For dinner we went to the Indian Restaurant Anarbagh, near the Rodeo Drive area.   Oh, and about a block from the restaurant we saw Ron Artest walking down the street.   Both Zac and our driver spotted him immediately.   Honestly looked like he was on his way to a birthday party....

Sadly, we can't remember exactly what we ordered at Anarbagh (downside of waiting 6 months to write about it), but it was all very good!! 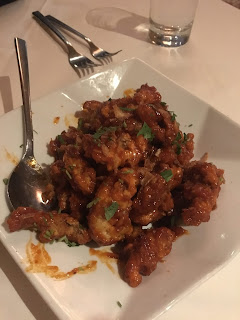 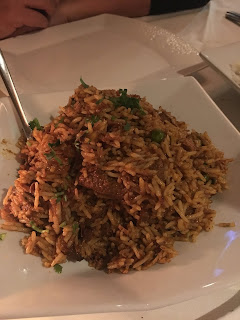 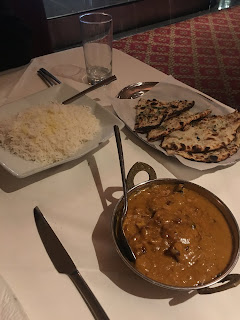 All that food gave us the energy we needed to do some more exploring! We walked around Beverly Hills and to an area called Tri-West, and the Urth Coffee shop on Melrose. 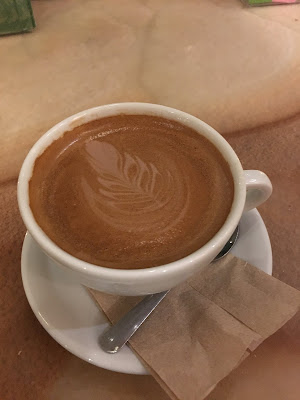 Now for the creme da la creme of the day - Dessert.  I may have mentioned in an earlier post, but we had $50 per day to use at the hotel on drinks and food, came with our Hilton Gold status perks.  We didn't have breakfast at the hotel that day, so guess what that means.....

What you see here are two grown people acting like Kevin McCallister in Home Alone 2, when he's at the Plaza without proper adult supervision.   Chocolate Tort, cookie sampler, vanilla milkshake, and an ice cream sundae, all brought to us on a fancy cart that turns into a table for us to eat this in our room. 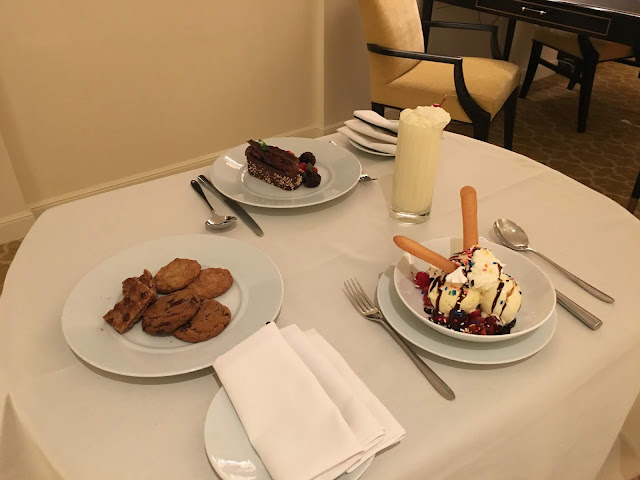 And that my friends is Day 3 of our trip.   Next up is Day 4 - we head downtown!  LA Food hall, some family history, LeBron James and the LA Lakers!