Have you ever thought about what cuisine you would eat if you had to choose just one?  Broadly speaking, choices would be Italian, Asian, American (think hamburgers, steak, and potatoes), Mexican, Greek, French, etc.  Perhaps you have even engaged a friend or significant other to ponder this very important question.  Seems just as productive an exercise as the "if you were on death row what would your last meal be" conversation, right? Well let's say I really had to choose, I would have to say Asian.  It could be my DNA talking - I am 1/4 Japanese after all.  My Japanese American Grandmother cooked some Japanese food for us all throughout my life, but mostly fried rice, and I'm not sure the bacon she added was all that authentic.  She'd cook other things for my parents that she didn't think my brother and I would like too.  I've also prepared her favorite sushi recipe with her a few times (see a previous post A Little Family Heritage for the recipe and pictures).  But all in all, I'd have to say I'd pick Asian because it is so darn tasty (Greek is a very close 2nd...).  We have some excellent Thai, Japanese, Vietnamese, and Chinese restaurants here in Prattville and Montgomery (shout out to Green Papaya, Tokyo, Osaka, La'Taste, and Mr. Chens).

Speaking of Thai - my favorite dish to order when at a Thai restaurant is Red Curry.  Green Papaya, located in Montgomery, AL, is my favorite Thai restaurant, which is really Thai - Lao cuisine.  There are a lot of curries, and a lot of dishes with basil on the menu (the Spicy Fried Rice is AMAZING).  I am not into crazy spicy food, but if it has a little bit of a bite I'm good with it.  Recently after an Alabama football game, Zac and I went to a Thai restaurant in Tuscaloosa called Ruan Thai, located on the Strip.  I ordered Red Curry - delicious!   This got me thinking that I should really try and make it since I love it so much.   Cooking Asian food is completely intimidating to me though.  I've made some Thai dishes before, but they are usually peanut centered vs coconut centered, if that makes sense.  I make a Thai shrimp dish that is pretty darn good.  There are a few other Asian dishes we make, but generally they are on the simple side.  The ingredients can be hard to find.   I can also order it out so easily (remember my list of awesome Asian places? All have perfected the To Go order!)

Most of the time when I'm thinking of a new dish to try, I want it to be a challenge.  That's assuming I'm not in any hurry of course, which means the weekend (I don't see how anyone has much time to cook on a work night, seriously).   I knew this weekend I wanted to do something new, and thinking back on my Red Curry fascination thought it was time to try it.  I also went back to Ruan Thai again recently, and had their coconut soup for the first time, and thought that would go perfectly with Red Curry (and I order the two together often from my local joint).  So, off I went researching recipes and see what ingredients I could find locally. 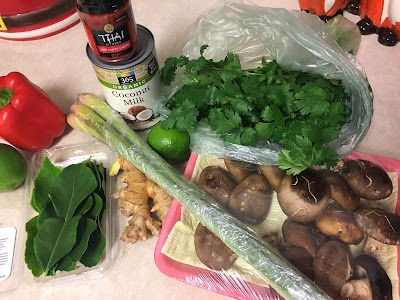 Thankfully I was able to find everything between a local Asian market (Mr Chens market, adjacent to the Chinese restaurant of the same name in Montgomery), and Whole Foods.  I bought the lemongrass stalks and shiitake mushrooms at Mr Chens, the keffir lime leaves, ginger, and everything else at Whole Foods.

This was my first time ever using lemongrass.  So I Googled it of course, and found some great tips on cooking with it.  It's like cooking with a leek really, you end up not using most of it.  Cut off the dark green part, peel off the outer leaves until what is left is mostly yellow.  From there, you can do it different ways, but the intent is to infuse the flavor into the liquid in the recipe I made.  So I scored it with a knife and crushed it a bit so there was a lot of contact with the stock.  Same principal as smashing a garlic clove to infuse oil.    Now onto the recipes!

Both of these recipes said they would take roughly 30 mins, and when cooking them simultaneously it took me about an hour and a half, but that includes cleaning.  I'm one of those people that prefers to have everything prepped before I start cooking anything.  This is through much learning. If I'm across the kitchen chopping or whatever, and something is cooking that I'm supposed to be half watching, well let's just say that does not work out well.  This is not too different than most cooking shows where most things are magically measured out and already washed and chopped, so the chef can focus on actual cooking.  Then, while I'm cooking if there is some waiting around for things to boil or simmer or whatever, I clean.  My kitchen is not that big, so generally I need that space for something else soon anyway, like plating, or my sink is simply overflowing so I must clean something.  So, that being said, I took me an hour and a half to make all this, and in the end my kitchen was clean except for the two pots the food was in.  Two thumbs up to me.

Tips - For both of these recipes, use full fat coconut milk.  Worth it.  For the sugar, I use coconut sugar anyway in place of regular white sugar.  You can read about coconut sugar online, but basically your body breaks it down differently than regular sugar, in a good way. It's better for diabetics because of that.  We are not diabetic, but have family members who are, so have just gotten in the habit of using it.   However, most recipes I saw for Thai cuisine called for Palm or Coconut sugar. 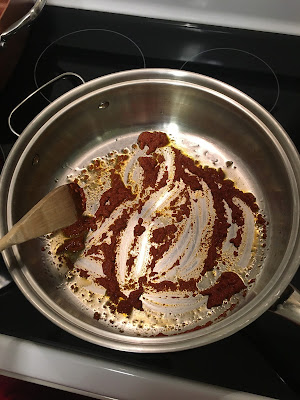 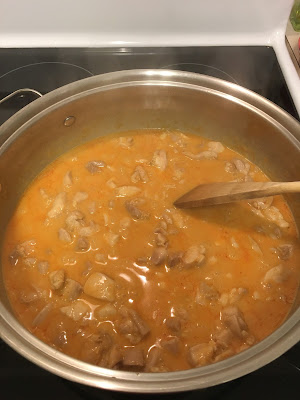 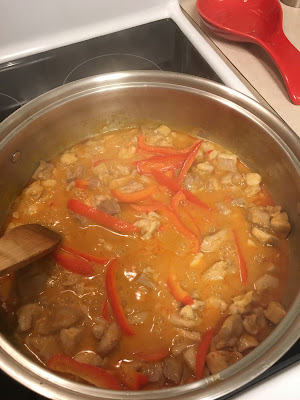 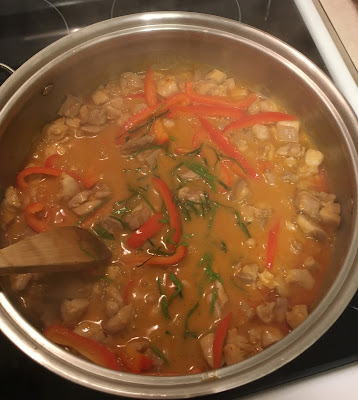 So my first try at both Thai Red Curry and Coconut Soup were a success! I'm thinking both will be even better as leftovers.....
Posted by Barbara at 8:49 PM