The weekend before Thanksgiving Zac and I spent Thursday - Sunday on a long weekend trip to Charleston SC and Savannah, Georgia.  I detailed our amazing meal at Husk in Charleston here, check it out.  Friday began with work, but by midday we were ready to conquer historic Charleston. We started off with lunch at Slightly North of Broad, or S.N.O.B. 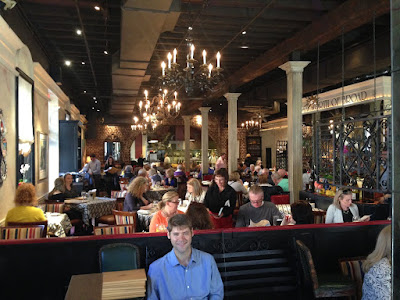 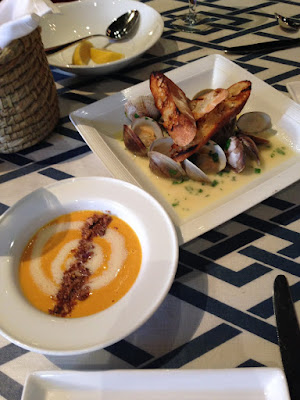 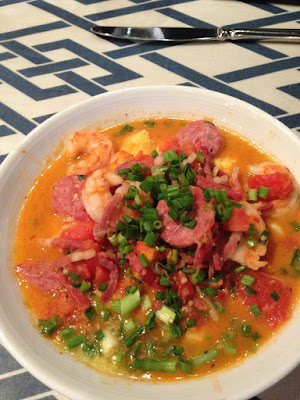 I had one of the specials, which was sauteed shrimp with vegetables and avocado salad. All the food was good, shrimp and grits was probably my favorite!  Bisque had the perfect consistency, it was surprisingly light and airy. 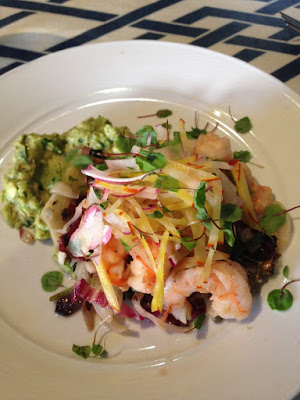 After lunch we set about exploring the peninsula of historic Charleston on our own self paced walking tour.  Charleston is a beautiful city, and I particularly enjoyed the area south of Broad on Meeting Street. Below is the Calhoun mansion, so pretty! 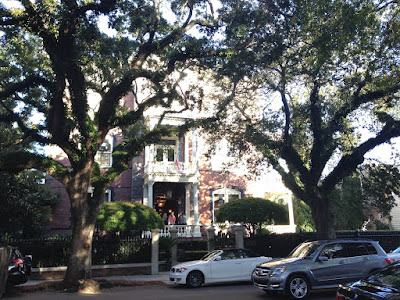 We walked down to the tip of the peninsula to Battery street and park.  The blue skies, blue water, and trees (and perfect upper 50s low 60s temps) made the park a perfect place to take a break and enjoy the scenery! 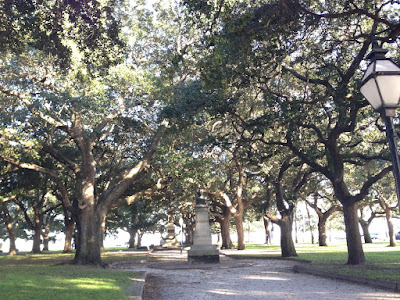 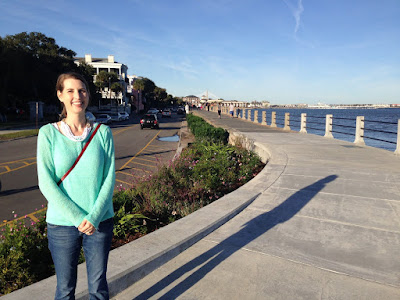 For dinner we headed southwest of Charleston to the Folly Beach area to Bowens Island Restaurant. We passed the restaurant and went all the way to Folly Beach to catch a glimpse of the Atlantic Ocean, and got there just at sunset! 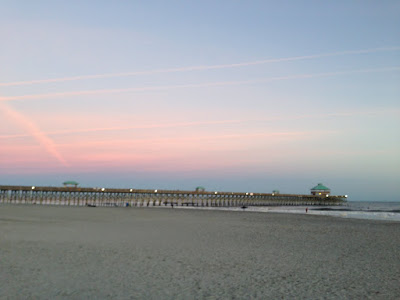 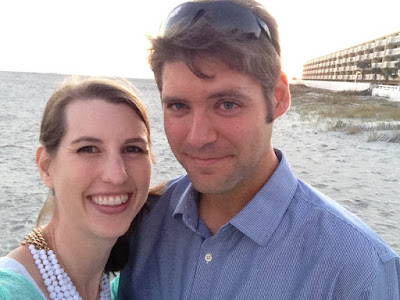 We watched the sun completely set over at Bowen's Island Restaurant, which is a few minutes inland from the Ocean.  What a show!  A small boat passing by made it that much better, it was beyond perfect.  One of the best sunsets ever. 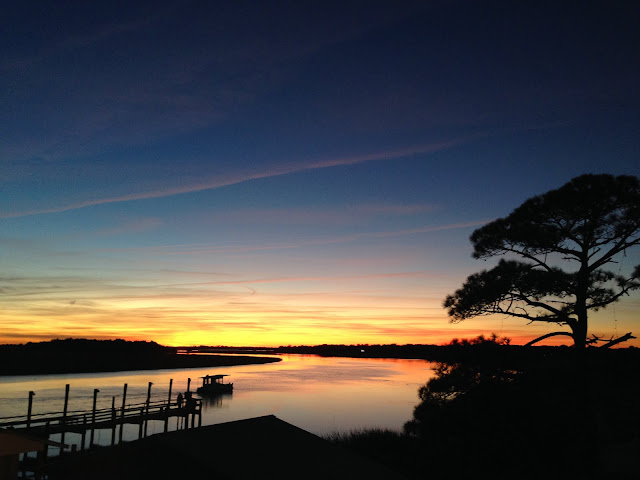 Now down to business - dinner!  We knew we had to get the oysters, heard good things about them here, and decided to get a sampling of just about everything.  At Bowen's you order at a counter, find your table, and then listen up when your food is ready. Pretty casual place.  For the oysters, they give you a ticket and instruct you to go downstairs to the "Oyster room" where your batch is steamed fresh just for you.  I handled getting the oysters.  We ordered a tray, not really knowing what that meant.  It literally was a tray, like at a cafeteria, full of oysters. 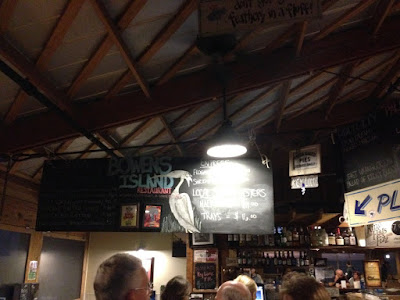 All of the food was delicious and exactly what we were hoping for! So let me tell you about the oysters.....I wish we had a better photo, or better yet a video of what shucking those oysters was like. It's not shucking AN oyster but taking this huge chunk of what looked like ocean floor, which could have 5-10 oysters of varying sizes on each chunk.  Also, we had not actually shucked any oysters ever, much less thus mass of ocean floor like substance I'm describing.  But we are brave and adventurous, right? Right, we don't even hesitate.

I dive right in.  Not to brag, but I'm a natural.  Zac said I looked like an otter or some other marine mammal analyzing it's prey, and immediately figured it out as if my life depended on it and shucked away. I cracked the code.  Anyway, it was a LOT of fun.  I shucked and shucked to the point one of the waitresses must have taken notice and brought ANOTHER HALF TRAY that another nearby couple had given up on.  They did not crack the code.   I could have used the towel more effectively to hold them, lesson learned.   Another tip - you can't be afraid to get your hands completely covered with seafood plunder.

Very glad we went to Bowen's Island Restaurant! If back in that area could see us going back there again.  It was pretty affordable too, particularly the oysters (I guess since they make you do half the work!)  Fun casual place with great fresh seafood!

Later that night, we ventured out again to experience Charleston at night and hunt out some tasty sweet treats.  We first stopped at Belgian Gelato on Vendue Range.  I have never thought to put ice cream on a hot waffle.  Given my love of waffles, I don't see how I've never seen or had this before! We ordered one of the waffles with cappuccino gelato, chocolate, and coffee sauce.  It was SO GOOD.  Waffle + ice cream + hot fudge type sauce = heaven. 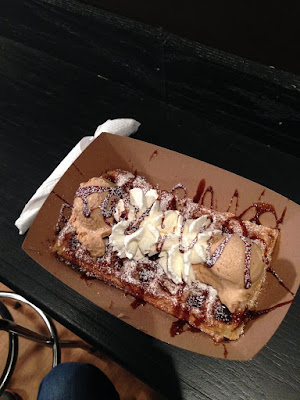 The night life picked up a bit near Market street, but we were actually a little surprised how quiet it was everywhere else. Since so much of historic Charleston is residential, I guess this shouldn't be so surprising after all.  We had Kaminsky's dessert bar the night before after Husk, and didn't have to wait at all (it was a Thursday night).  The line was now out the door and down the street! Tip - go to Kaminsky's on a night other than Friday at 9pm.

We kept walking, turned north on King Street, passed the College of Charleston area, until we got to Macintosh. Zac had heard good things, so we wanted to stop in just for a small bite (meaning a 2nd dessert, but it's a vacation, so it's ok).  Zac ordered the RC cola cake (with pop rocks on the inside!) which came with strawberry shortcake home made ice cream.  I got a coffee and the home made ice cream sampler. 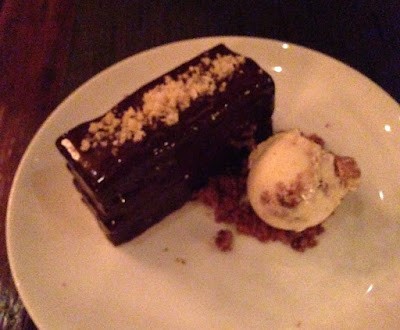 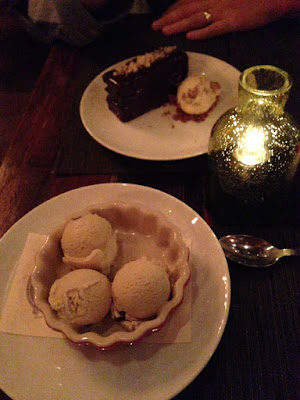 Ok now we were officially full, but what a great ending to our time in Charleston!!  We Ubered back to the hotel, got a great night's sleep, and hit the road to Savannah Saturday morning. 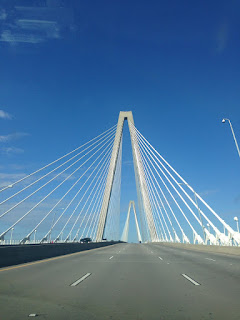 So long Charleston, thanks for a tasty and fun couple of days!