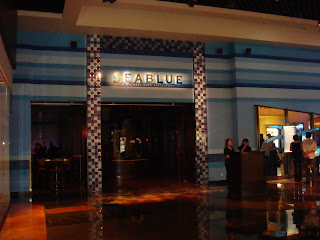 We first read about this restaurant in our guide book.  We decided to go after we got a buy one get one free entree coupon from one of the discount Vegas show ticket stores along the strip.  Michael Mina has a 1 star Michelin restaurant in town (his namesake Michael Mina restaurant) as well as restaurants around the country, so we figured SeaBlue would not disappoint, and it did not. The food was absolutely amazing, mostly seafood with a Mediterranean flare to it. If I had to pick our best meal in Vegas, which would be very difficult to do, this one might just be it.  The inside of SeaBlue was also very appealing.  One of the walls next to our booth was a water flowing over a blue backlit wall. 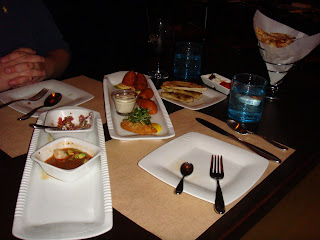 Appetizer No. 1 (left) - We got the "Tasting of Three" Raw and Marinated dishes, which included Yellow Tail Jack Crudo, Spicy Shiitake Mushroom with Ponzu, Scallop Ceviche with Tomato, Citrus, and Avocado, and Tuna Tartare with Pocket Bread, Pinenut, and Pomegranate.
Appetizer No. 2 (right) - We got the "Tasting of Three" fried and crusted dishes, which included Lobster Corn Dogs with Whole-Grain Mustard Dipping Sauce, Corn & Jalapeño "HUSH PUPPIES" with Smoked Pepper Dip, and Crab-Stuffed Piquillo Peppers with Basil Aïoli. 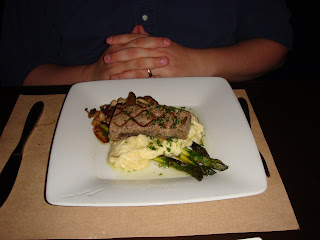 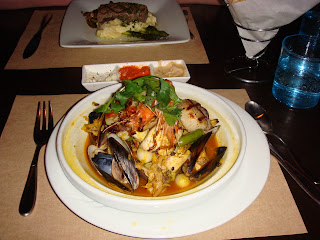 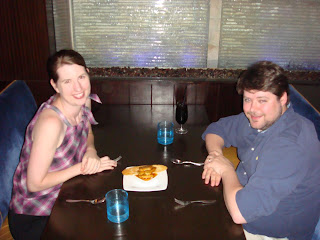 Dessert - This dessert was a banana's foster on top of a creme brulee, very tasty!!
Posted by Barbara at 4:30 PM